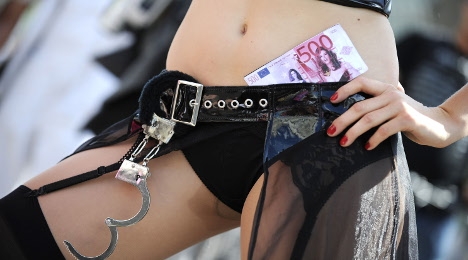 Paying or accepting payment for sex is not a crime in France. Photo: AFP
Prostitution in France brings in an annual turnover of €3.2 billion, a new study funded by the European Commission has found.
In an attempt to “reverse the myth that sex work generates sustained growth”, the report shone the spotlight on the world's oldest profession and examined both how prostitutes operate and where their earnings go .
It found that of France's nearly 40,000 prostitutes, the vast majority operated online (62 percent), while 30 percent met clients on the streets. The remaining 8 percent worked in clubs or massage parlours.
They bring in an average gross total of €87,700 a year – much of which is sent abroad.
The authors of the report, who are campaigning for the abolition of prostitution, say that there is a serious tax evasion on these earning that totals €853 million a year. They added that the total 'cost' on society was €1.6 billion.
“If the clients of prostitutes were to spend their money on any other activity, France would increase its tax revenues and save several hundred million euros each year from prostitute-related expenses,” they wrote, reported French channel BFM TV.
The report concluded that there was a higher human cost for sex workers than those in other professions, especially considering they are six times more likely to be victims of rape and 12 times more likely to commit suicide.
The profession also proves costly for indirect social consequences, the study noted, such as imprisonment for pimping, health expenses, and addictions.
Maîtresse Gilda, spokeswoman from the French sex-workers union Strass said the figures in the study were “delusional”.
“This isn't a scientific study,” she told French newspaper 20 Minutes. “The arguments aren't substantiated. Not only does it belittle us, but it puts the economic and social burdens on our shoulders.”
“How can they know the number of prostitutes in France? This is an industry where everything is secret and opaque. The numbers are insane,” she added.
Paying or accepting payment for sex currently is not, in itself, a crime in France. But soliciting, pimping — which includes running brothels — and the sale of sex by minors are prohibited.