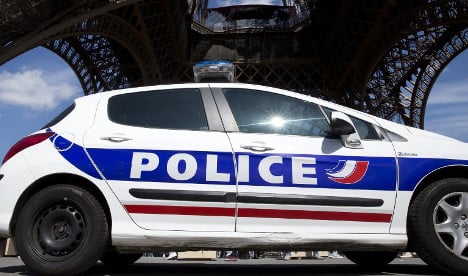 Police in front of the Eiffel Tower. Photo: AFP
The suspected thieves, who were Romanian, were living somewhat luxury lives in hotels in Issy-les-Moulineaux and Meudon.
They had operated for two years at the Eiffel Tower and the Palace of Versailles, reported French newspaper Le Figaro.
Using a slew of techniques to pickpocket the victims – including dressing up like tourists themselves – the thieves could each earn up to €4,000 per day during peak tourist season.
Some of them even bought tickets to ascend the tower, no doubt to continue their crimes at the top. They operated a well-oiled system, working in teams of three or four, and often preying on Asian tourists due to their propensity to carry large amounts of cash. Le Figaro reported that the gang had rung up a €100,000 hotel bill over the years, sending the majority of their haul back to Romania where network heads would invest in property.
A police source told the paper that the undercover police monitoring had begun in September last year, and involved a “tremendous amount of investigative work”, on par with the work involved in a drug trafficking case.
The source added that there was no point in trying to catch a pickpocket red handed, as the thefts would only continue in the same vain afterwards. It was vital, they explained, to trace the thieves back to their nest to stop the whole gang.
Petty crime outside the Eiffel Tower had become such a headache for staff members that they refused to open the attraction for a whole day last week, going on strike in an attempt to get their managers to solve the problem.
READ ALSO: Twelve facts you didn't know about the Eiffel Tower