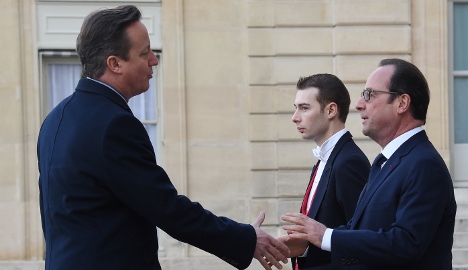 Cameron and Hollande held talks in Paris over the future of the EU on Thursday night. Photo: AFP

Cameron made his plea to the EU as he swung through Paris on his whistle-stop tour of European capitals to lobby leaders for changes to the 28-nation bloc.

At a joint press briefing at the Elysée Palace with French President François Hollande, Cameron said: “The status quo is not good enough and I think there are changes that can benefit not just Britain but the rest of Europe too.

“My priority is to reform Europe and to address the concerns of the British people around our membership,” Cameron told reporters.

“Of course the priority for France is to strengthen the eurozone and the single currency,” Cameron said, before telling Hollande that the UK won't stand in the way of closer integration.

The Prime Minister said that UK and France shared a “common challenge which is to find to find a solution to these problems”.

Cameron said making the EU more successful was the “challenge of our time”.

The UK will hold a referendum on whether to stay in the EU before the end of 2017 but Cameron has vowed to renegotiate Britain's relation to the bloc if he is to campaign for a yes vote.

Among other measures he wants to bloc EU migrants from accessing unemployment benefits and have an opt out from the EU's principle of working towards “ever closer cooperation”.

For his part, François Hollande repeated his message that France wants the UK to remain in the European Union “to the benefit of both Europe and the UK”.

One French person said today: 'we are sick of Cameron and his constant demands'. Wonder if Hollande feels the same pic.twitter.com/dFDtqsLUz6

He said that Cameron had only revealed “some information” about what exactly he wants to reform and that he looked forward to hearing more about what the prime minister wants during future discussions.

Cameron was due to have a dinner with Hollande where the pair will continue to discuss the future of the EU. He will continue his charm offensive on Friday when he visits Germany and Poland.

And #Cameron leaves the Elysée palace to continue his charm offensive tour around Europe. Tomorrow Poland and Berlin. pic.twitter.com/SKGE5jOtKE

Earlier in the day Hollande's Foreign Minister Laurent Fabius was a little more outspoken as he warned Britain that holding a referendum was “very risky”.

Fabius said that France was in favour of a simplification of the functioning of the 28-nation bloc.

“But even though we say yes to an improvement of the Union, we cannot agree with its breakup.”