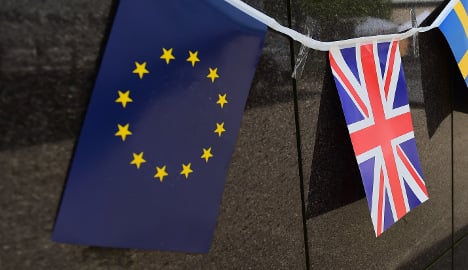 Not ALL British expats will be able to vote in the EU referendum. Photo: AFP

Britons will soon be given the chance to vote “Yes” to stay in the EU, but many UK citizens living in EU member states look like being barred from the vote.

The government introduced its EU referendum bill to parliament on Thursday, a day after it was presented in the Queen’s speech.

The simple question on the ballot paper will be “Should the United Kingdom remain a member of the European Union?” Voters will then be asked to answer “Yes” or “No”.

A statement from Downing Street said the vote represented “an important choice about our country’s destiny.”

“It will pave the way for the British people to have their say for the first time in 40 years on our place in the EU,” Downing Street said.

But the reality is, thousands of Britons who arguably have the most to lose if the “No” camp is triumphant, are unlikely to have their say in that choice.

Currently anyone who has been living abroad for 15 years or more is barred from voting in General Elections in Britain and the same rule will apply for the EU referendum, despite the result potentially having a direct impact on expats.

To twist the knife in even further the Conservative government has planned to scrap the 15-year rule at some point during Prime Minister David Cameron’s second term, but they seem unwilling to push this reform through in time for the referendum.

Instead it looks likely the referendum will be brought forward that may not leave enough for the voting rights bill to pass.

That stance has left many long term British expats in France both bemused and angry.

Christopher Chantrey, from the British Community Committee in France says he is at a loss to explain why the government cannot accommodate all expats.

“The outcome of the referendum will directly affect those British citizens living in any EU member state,” he told The Local.

“Members of the British community in France feel very strongly about this because of the potential impact on their lives, especially the early retirees, who would probably have to leave France if Britain left the EU.

“What I don’t understand is why the votes for life bill can’t be passed in time for the referendum. We haven’t been told why it seemingly can’t be done.”

READ ALSO: Give us a vote – we've got the most to lose if the UK quits ‘No way to run a business or a country’

Chantrey says the stance of the UK government is bizarre when citizens of many other countries, including France, are given the right to vote for life.

“In France we hear all about the French community voting in the elections back home but Brits abroad are not treated in the same way.

“What makes Brits different from French, Spanish and Portuguese etc? What is it about Britain that means we lose our right to vote? A right to vote is primarily linked to nationality.”

Chantrey said the UK government is wrong to neglect its expats.

Helen Curran, who lives in Boullay-les-Troux said there is similar concern among European nationals living in the UK.

“I am concerned about the fact that I can't vote in the referendum. I also have friends who are European nationals living in the UK, and they too are angry that they have no voice,” she said.

“When people complain about the “undemocratic” EU, do they consider the lack of voting rights for EU citizens around Europe?”

France based Brian Cave, author of the blog Pensioners Debout, who has been a long-time campaigner for the 15-year rule to be scrapped said: “I have been in France for more than 15 years and I want to vote in the referendum and all British residents in the EU should have it.

“We are in France as EU citizens not as foreigners, but if the UK leaves the EU then that’s how we will be seen and France can introduce any old law for how it treats foreigners,” he said.

With so much riding on the result of the referendum questions are being asked why exactly Prime Minister David Cameron is effectively denying so many the right to vote.

“The only reason I can think for why we haven’t been given the vote is that it’s a cunning ploy to keep all the Euroscpetics in the Tory party quiet,” said Cave.

While most Brits in France are united in the belief that they should be able to vote in the referendum, many are divided over whether the UK should actually remain in the EU.

In a debate on the Survive France Network, one commenter said: “I'll vote to leave as I believe that the EU has become an undemocratic leviathan serving only the egos of the richer nations and providing jobs for redundant politicians.”

Another responded: “I chuckle whenever I hear someone say how undemocratic the EU is. Yes, it has its faults, but the UK is governed by a party winning 37 percent of the votes looking after 20 percent of the population's interests, intending to scrap the human rights bill. God help us all if we do leave the EU.” 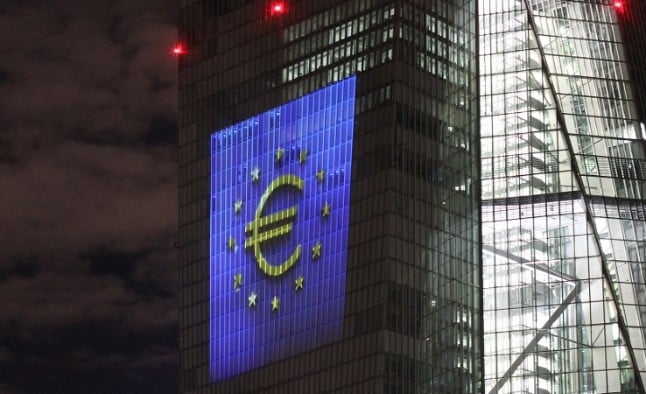 The Euro is projected onto the walls of the European Central Bank in Brussels. Photo: Daniel Rolund/AFP

European Commission chief Ursula von der Leyen called the euro “a true symbol for the strength of Europe” while European Central Bank President Christine Lagarde described it as “a beacon of stability and solidity around the world”.

Euro banknotes and coins came into circulation in 12 countries on January 1, 2002, greeted by a mix of enthusiasm and scepticism from citizens who had to trade in their Deutsche marks, French francs, pesetas and liras.

The euro is now used by 340 million people in 19 nations, from Ireland to Germany to Slovakia. Bulgaria, Croatia and Romania are next in line to join the eurozone — though people are divided over the benefits of abandoning their national currencies.

European Council President Charles Michel argued it was necessary to leverage the euro to back up the EU’s goals of fighting climate change and leading on digital innovation. He added that it was “vital” work on a banking union and a capital markets
union be completed.

The idea of creating the euro first emerged in the 1970s as a way to deepen European integration, make trade simpler between member nations and give the continent a currency to compete with the mighty US dollar.

“Clearly, Europe and the euro have become inseparable,” Lagarde wrote in a blog post. “For young Europeans… it must be almost impossible to imagine Europe without it.”

In the euro’s initial days, consumers were concerned it caused prices to rise as countries converted to the new currency. Though some products — such as coffee at cafes — slightly increased as businesses rounded up their conversions, official statistics have shown that the euro has brought more stable inflation.

Dearer goods have not increased in price, and even dropped in some cases. Nevertheless, the belief that the euro has made everything more expensive persists.

The red, blue and orange banknotes were designed to look the same everywhere, with illustrations of generic Gothic, Romanesque and Renaissance architecture to ensure no country was represented over the others.

In December, the ECB said the bills were ready for a makeover, announcing a design and consultation process with help from the public. A decision is expected in 2024.

“After 20 years, it’s time to review the look of our banknotes to make them more relatable to Europeans of all ages and backgrounds,” Lagarde said.

Euro banknotes are “here to stay”, she said, although the ECB is also considering creating a digital euro in step with other central banks around the globe.

While the dollar still reigns supreme across the globe, the euro is now the world’s second most-used currency, accounting for 20 percent of global foreign exchange reserves compared to 60 percent for the US greenback.

Von der Leyen, in a video statement, said: “We are the biggest player in the world trade and nearly half of this trade takes place in euros.”

The eurozone faced an existential threat a decade ago when it was rocked by a debt crisis that began in Greece and spread to other countries. Greece, Ireland, Portugal, Spain and Cyprus were saved through bailouts in return for austerity measures, and the euro stepped back from the brink.

Members of the Eurogroup of finance ministers said in a joint article they learned “valuable lessons” from that experience that enabled their euro-using nations to swiftly respond to fall-out from the coronavirus pandemic.

Yanis Varoufakis, now leader of the DiEM 25 party who resigned as Greek finance minister during the debt crisis, remains a sharp critic of the euro. Varoufakis told the Democracy in Europe Movement 25 website that the euro may seem to make sense in calm periods because borrowing costs are lower and there are no exchange rates.

But retaining a nation’s currency is like “automobile assurance,” he said, as people do not know its value until there is a road accident. In fact, he charged, the euro increases the risk of having an accident.