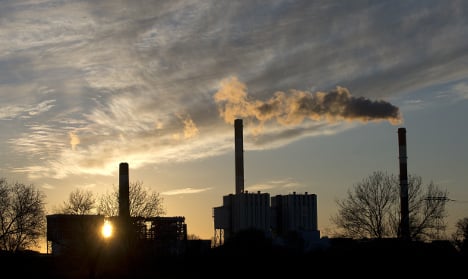 The EDF (Electricty of France) powerhouse of Cordemais near Nantes, western France. Photo: AFP
Twenty percent of the €170 million ($185-million) cost of the November 30th to December 11th conference will come from the private sector, a senior foreign ministry official said.
Pierre-Henri Guignard, who is responsible for organising the event, identified 20 firms in the first batch of sponsors.
They include French energy companies Engie and EDF, BNP Paribas bank, Renault Nissan, Air France, insurance giant Axa, luxury goods maker LVMH as well as Ikea of Sweden and Italian insurance company Generali.
The conference “will be financed by French champions of pollution,” Oxfam France complained.
It pointed the finger at what it called “greenwashing” by companies involved in coal-fired energy or the financing of it.
“The French government had pledged to work with 'climate-compatible' companies, but its hypocrisy is now clear,” the NGO said.
The talks — called “COP 21,” for the 21st conference of the parties — will assemble 195 countries and the European Union under the UN Framework Convention on Climate Change (UNFCCC).
The goal is to seal a global pact on limiting emissions of heat-trapping “greenhouse” gases — the invisible pollution from burning fossil fuels that scientists say is driving dangerous climate change.
Corporate sponsorship is a routine feature of the annual COPs. The UNFCCC has consultative guidelines about the nature of sponsors and prominence of logos when used in connection with the event.
COP 19 — the 2013 conference in Warsaw — was disrupted by protests over the staging of an “International Coal and Climate Summit” in parallel to the talks.
The Paris conference marks the first attempt at forging a global accord on climate change since the ill-fated Copenhagen Summit in 2009. That event cost €150 million, said Guignard.