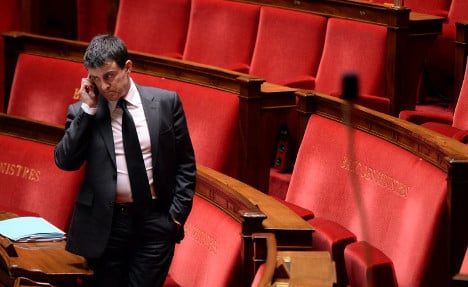 Prime Minister Manuel Valls speaks on the telephone. Photo: AFP
Who says the youth of today aren't resourceful?
One 16-year-old French school pupil showed unusual determination to get straight to the source for a school project about politics that his girlfriend was writing.
The boy managed to get hold of Prime Minister Manuel Valls's personal phone number a year ago from his friend's mother, who works as an MP, reported the Le Figaro newspaper.
He even exchanged a few short texts with Valls at the time.
Last week, when he realized he could do with a hand with the presentation, he decided not to trawl the internet as most pupils would have done, but to pick up his phone and give Valls a call.
“I said to myself: I'm going to call him and see what he has to say,” the young boy told the paper.
“If he doesn't respond then it's no big deal, I'll only have wasted five minutes of my life.”
Valls was quick to respond, the paper reported, but seemingly too busy running the country to be of any use on the project.
“I'm sorry but I can't help. If I did, I wouldn't be able to do my job,” Valls wrote. “But drop me a text message, since you have my number, and I'll see what I can do.”
The PM didn't get back to the boy again, however, and his girlfriend was left without the PM's inside word.
French prime ministers don't always leave students empty handed, however.
In early 2014, former PM Jean-Marc Ayrault responded to a student's plea for help on Twitter, sending him information about the Matignon Agreements – a set of agreements between trade unions and the French state in 1936 – and wishing him luck with his studies.