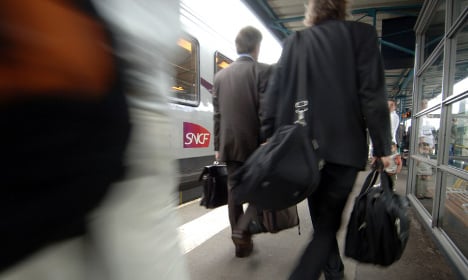 Numerous train lines linking cities across France could soon be removed if the Ministry of Transport decides to act on the advice presented in a controversial report that was published on Tuesday.

The report says France’s Intercity train network – not to be confused with the high-speed TGV network – has fallen into a state of disrepair and it would be better for passengers and the government if certain lines were removed.

It talks of “significantly increased travel times”, “continually deteriorating service”, and “a decline in regularity” on a network that is €400 million in debt.

When it came to France’s night trains, the writer of the report Philippe Duron, a Socialist party MP, said the “economic model is no longer viable”.

Among the night trains that could be for the chop are the services between Paris and Hendaye in the south west, Paris-Savoie and also night trains that run from the north-east to the Mediterranean, and from Paris to Côte-Vermaille, near the Spanish border.

Other intercity networks that could be soon scrapped include Amiens to Boulogne-sur-Mer, Quimper to Nantes in  the west of France and Reims to Dijon in the east.

A full map of the threatened services is included in the tweet below.

On the other hand however the report suggests improving the services between Paris and Caen and Paris-Limoges-Toulouse, which have “strong potential”.

It also notes that the recent Macron Law will mean the new coach services that will operate between many towns in France will be more viable options that the trains.

The Intercity services, run by Corail and Téoz, run 325 trains daily in France on around 40 lines – serving a total of more than 300 destinations.

But the controversial report has prompted an outcry among France’s politicians and rail user groups alike.

“The existence of these [Intercity] trains is extremely important for our towns and helps to avoid a desertification of the regions,” said Caroline Cayeux, an MP from the opposition UMP party, who is also the president of the organisation Villes de France (Towns of France).

The deputy chief of the far-right National Front party said any closure of Intercity train lines would be “scandalous” and blamed it on the Brussels logic of wanting to liberalize public services.

Pierre Laurent the chief of France's Communist Party (PSF) was equally scathing about the prospect of cutting back on certain lines.

France is seen as having a two-tiered rail service, with the highly acclaimed high-speed TGV service benefiting from heavy investment over the years and the intercity and regional services which the government have largely neglected.