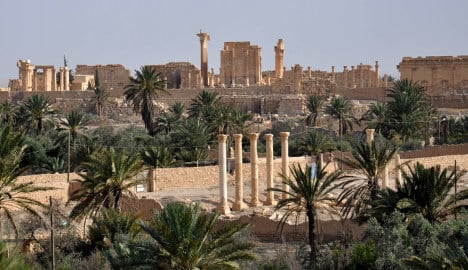 The ancient city of Palmyra whose archaeological treasures are threatened by Isis. Photo: AFP

Referring to the Islamic State group by its Arabic name, Hollande said: “We have to act because there is a threat against these monuments which are part of humankind's inheritance and at the same time we must act against Daesh,”

“It is really upsetting when a site of such riches which belongs to all of humanity falls into the hands of a terrorist group,” he added, as he arrived at an EU-Eastern Partnership summit in the Latvian capital Riga.

UNESCO warned earlier that the destruction of the ancient city would be “an enormous loss to humanity”.

The capture of Palmyra, a 2,000-year-old metropolis from the Roman era, reportedly means IS now controls more than half of Syria at a time when it is also expanding its territory in neighbouring Iraq.

There, IS sparked international outrage this year when it blew up the ancient Assyrian city of Nimrud and smashed artefacts in the Mosul museum.

The fear now is the extremists will do the same in Palmyra.