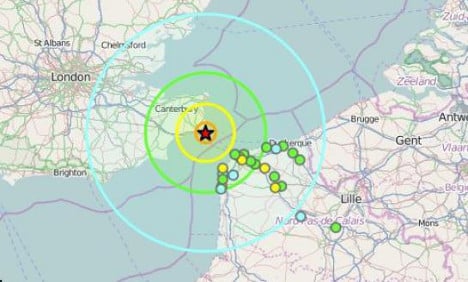 The quake was felt across the Channel in the northern French departement of Pas-de-Calais. Photo: France's Central Bureau of Seismology (BCSF)
The quake's epicentre was actually in the south-east of the UK, 15 kilometres beneath a town called Sandwich. It hit shortly before 4am French time.
The British Geological Survey (BGS) measured the tremor at a magnitude of 4.2, while France's Central Bureau of Seismology (BCSF) recorded it at 4.4.
There were five calls to the fire brigade from homes in the northern French towns of Calais, Boulogne-sur-Mer, and Arras, though no firefighters were dispatched, reported French channel BFM TV.
In the UK, however, residents near Sandwich told local media that their homes were shaking.
“Plates came off the wall, doors came open – it was all very frightening,” Sandwich resident Theresa Foord told the BBC.
“I heard this massive crash and then the whole house started to shake. It seemed to go on for ages but it was about three to five seconds.”