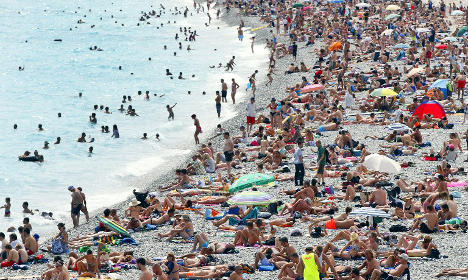 Holidayers in Nice, southern France. Photo: AFP
The summer holidays are almost upon us, and many in France are no doubt already scrambling to find a good option that won't break the budget.
And if a cheaper option is what you're looking for, you'd best avoid Paris.
Yes, a week-long stay in a place with two rooms will set you back €2,458 in the capital, according to a recent study from Tripadvisor.
Of course, the Ile de France was the most expensive region in the country in the comparison of 16,000 properties nationwide available between July 1st and August 31st. (Who can deny the charms of Paris? Photo: The Place Dauphine – Henry de Saussure Copeland/Flickr)
The second-most expensive region was that of the Provence-Alpes-Côtes d’Azur in the south, also known as PACA, at €1,341 a week.
But the cheapest was less than half that, going for only €607, in Lorraine.
Lorraine? Yes, Lorraine, in the north east of the country on the border of Belgium, Germany, and Luxembourg. You might remember it from our story about the areas of France where British expats tend to avoid.
But that doesn't mean it's not worth a visit. Rebecca Pintre, a Brit who calls Lorraine home, told us at the time that it was “a great area with all the variety of British weather with a few occasional extremes of heat and cold”.
If reasonably decent weather isn't enough to swing you, there's also the stunning town of Nancy (below), some brilliant cathedrals, and the best quiche Lorraine you're ever likely to taste. (The town of Nancy, in Lorraine, is beautiful – but often wet. Photo: MorBCN/Flickr)

Other cheaper regions in the study included central Auvergne, and Haute Normandie in the north, a week in both of which would cost you under €650.
If you're looking for the coast and you don't want to break the bank, the best option is Brittany in the north west for an average of €838.
Otherwise, Aquitaine in the lower west coast was the only other region to top €1,000, with all the rest falling between €650 and €1,000.
Here is the full list, with the average price for a week in a 2-bedroom property on the right. A map of France's regions: