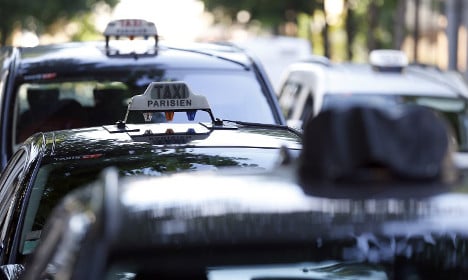 Paris taxis are set to have a flat rate for airport trips. Photo: AFP
Getting a cab from a Paris airport into the city is never the most pleasant experience – even with the opening of a new fast lane.
The cabbies have a notorious reputation for being grumpy, they've been known to rip off tourists by taking the long way around, and they rarely let passengers pay with anything but cash.
And then there's the bill which can be upwards of €80 depending on where exactly in Paris you're going and what time you travel.
But things are set to change thanks to new rules put forward by the government to bring in a flat rate from the airports into town that will replace the current fare system which depends on time spent in the car and distance travelled.
That means if you're travelling from the Charles de Gaulle airport, you'll pay €55 for a trip heading anywhere on the Left Bank and €50 for anywhere on the Right Bank.
If you're coming in from Orly, it will be €30 for the Left Bank and €35 for the Right Bank.
That sounds entirely reasonable from a traveller's point of view.
Why the change?
The government has said it's to make the transport option clearer for tourists, but also to maintain a competitive balance between the cabs and the private-hire cabs, known as VTCs (Vehicle de Tourisme avec Chauffeur), like Uber, which are becoming increasingly popular in the capital and already offer their own fixed fares.
But cabbies, meanwhile, are unimpressed with the proposed flat fares, and protested on Thursday outside the offices of the DGCCRF (General Directorate of Competition, Consumption and Repression of Frauds), handing out flyers to anyone who would take one. And perhaps they might just have a point this time.
The guidelines are too vague, they say, and don't account for the wide disparity in the length of distances between parts of Paris and the airports, which they say will leave clients and themselves losing out.
Taxi drivers say a trip between Orly and the Left Bank in Paris could cost less than €30 and private hire VTC cabs could be left to undercut them.
“Why aren't any prices imposed on them?” said one taxi driver.
The fixed tariffs are in place whether they're travelling on public holidays or weekends, or even if the journey is at rush hour.
And as anyone who's ever been stuck in Paris rush hour can attest, this is a big difference.
The fixed price would be the same during the day as at night, which means there's no real incentive to work after hours.
That could mean taxi drivers choosing to spend their nights in bed like the rest of us, so good luck getting a cab if you land at the airport late at night.
Plus setting a fixed price for the Left Bank and Right Bank does seem pretty arbitrary, when distances can obviously vary widely.
Although its hard to build up any sympathy for cabbies, whose strikes in protest at the rise of Uber have caused no end of travel chaos in the city, it's understandable to see why the drivers are not happy this time.
Perhaps the National Taxi Federation had the best idea with instead introducing a “maximum fare” for those taking long journeys.
We all know where this is heading. France's competition authority is set to deliver an opinion on the tariffs in mid June. We shouldn't be surprised if we get more gridlock-causing taxi protests before then.
Incidentally, the news comes hot on the heels of a new cheap fare from competitive shuttle easyBus, which rolled out a connection from Charles de Gaulle to Paris with tickets from as little as €2.
Perhaps we're better off on the bus anyway.

RYANAIR
Ryanair demands that Air France give up French airport slots in exchange for state aid
Url copied to clipboard!