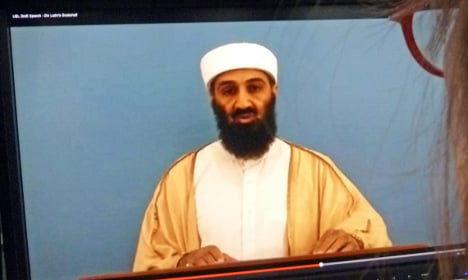 Osama bin Laden had over 20 books on the French economy in his collection. Photo: AFP

Osama bin Laden's English language reading list included numerous books by conspiracy theorists and an inordinate number
on France, suggesting he may have planned to strike the country's economy, US officials said Wednesday.

His “bookshelf” included titles by US journalist Bob Woodward and linguist and leftist Noam Chomsky as well as a history of the French economy and an unpublished manuscript of a study called “Did France Cause the Great Depression?”

US intelligence agencies for the first time released the list of English language texts found at Bin Laden's Pakistani compound after the American military raid that killed the Al-Qaeda chief on May 2, 2011.

Jeffrey Anchukaitis, spokesman for the US director of national intelligence's office, said Bin Laden “appears to have been interested in attacking the economy of France in the hope that an economic collapse there would trigger one in the US or the rest of the Western world.”

US intelligence analysts were not surprised Bin Laden was interested in attacking the economies of west, but Anchukaitis said “it was surprising that he asked for so many books on France.”

The spokesman told AFP that “just because he had these books doesn't mean he was committed to that course of action.”

“It means he had asked his lieutenants to bring him information on France,” he said.

The list, which was posted on the ODNI's website, also included texts on France's military health services, defense industry and “water profile.”

About half of the books on the reading list, promote various conspiracies — including books questioning the official account that Bin Laden's Al-Qaeda carried out the 9/11 attacks on New York and Washington.

The list included conspiracy theorist David Ray Griffin's “The New Pearl Harbor: Disturbing Questions About the Bush Administration and 9/11” and “The Secrets of the Federal Reserve” by Eustace Mullins, known as a denier of the Holocaust.

The release of the reading list coincided with the declassification of more than 100 documents found at Bin Laden's hideout, which came after Congress ordered the spy agencies to release more of the material that was seized in the Navy SEAL raid.

The documents, provided to AFP exclusively before their public release, shed light on Bin Laden's mindset, his concerns about security and his preoccupation with staging more large-scale attacks on the United States.