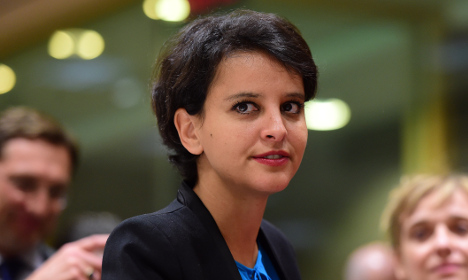 Education Minister Najat Vallaud-Belkacem, who has come under fire for her school reforms. Photo: AFP
Najat Vallaud-Belkacem, at 37 a rising star in French politics, denied there was any “hurry” to publish the official decree, stressing: “All the deadlines were as we had foreseen from the beginning.”
But the publication just hours after the minister had assured striking teachers that “I am listening to you”, prompted a furious response from unions.
One union, the SNES, described it as a “provocation”. Another, the SNALC, said: “The minister left the 'door open' only to smash it closed in the face of high school teachers, in an astonishing refusal of social dialogue.”
The main parts of the reform that have proved controversial are giving more autonomy to schools and replacing Latin and Ancient Greek languages classes with more general lessons on ancient civilisation and culture.
READ ALSO: On the streets with the striking French teachers Unions are also angry at plans to scrap the learning of a second modern language for gifted children (around 16 percent took these classes) at the age of 11, replacing it with a modern language for everyone at 12.
The right-wing opposition UMP was also up in arms, as it had called for a complete scrapping of the reforms, which will affect schools for children aged between 11 and 15.
Nathalie Kosciusko-Morizet, a high profile UMP deputy, said: “On one hand Najat Vallaud-Belkacem said she is open to discussion, the next day she publishes (the reform) in the Official Journal.”
“For those that were still in doubt, (this shows) the government's word is worthless,” she added.
The French education system strives to ensure that all children at high-school level receive exactly the same education.
READ ALSO: Why elitism is dragging France down Despite this attempt at egalitarianism, there are wide differences between schools in poorer areas and those in more prosperous parts of the country.
The high school drop-out rate among children of manual labourers is 32 percent whereas only five percent of children from white collar families drop out of school prematurely.
And the French education system has slipped down the rankings drawn up by the Organisation for Economic Cooperation and Development (OECD), which says it is one of the least egalitarian in the world.
The reforms aim to even up this balance but critics say it will result in a race to the bottom.