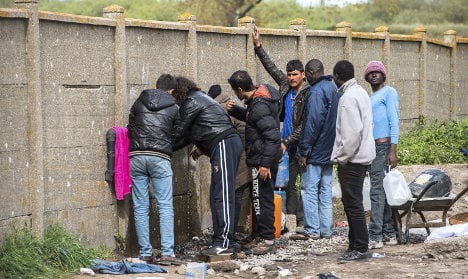 Migrants in northern France's Calais. Photo: AFP
Speaking at a joint press conference with German Chancellor Angela Merkel, Hollande said there was “no question of having immigrant quotas” because rules on border checks and policies for controlling immigration already existed.
The European Commission's plan, unveiled last week, called for asylum grants for 20,000 refugees in Europe over the coming years.
Each EU country should accept their fair share of asylum seekers, the commission said, based on a series of factors, such as that country's population, economic output, and unemployment rates.
France would be asked to take in 14.17 percent of all asylum seekers to reach the EU, second only to Germany at 18.42 percent. Italy at just under 12 percent and Spain at 9 percent were close behind.
Hollande continued:
“People who come because they think that Europe is a prosperous continent, even when they are not hired by companies… must be escorted back, that's the rule.”
“So one cannot talk of quotas, there can't be quotas for these migrants,” he said, adding that quotas for  “the right to asylum” would not make sense.
However, with refugees arriving in great numbers in certain countries, Hollande said, citing Germany, France or Sweden, “we must ensure that other countries can also play their part.
“This is what we call distribution,” Hollande said.
The proposal was already opposed by France's Prime Minister Manuel Valls over the weekend.
“I am against the introduction of quotas for migrants. This has never been in line with French proposals,” he told reporters.
Valls said that France had “already done a lot” when it came to helping asylum seekers, pointing to the fact that 5,000 refugees from Syria and 4,500 from Iraq had been resettled in Frace since 2012.
“Asylum is a right, attributed according to international criteria … That is why the number of its beneficiaries cannot be subject to quotas, one is an asylum seeker or not,” he added.
The Commission plan last week came amid concerns at the growing numbers of refugees, especially from war-torn countries like Syria, after weeks in which hundreds have died attempting to cross the Mediterranean Sea by boat to reach the continent.
Other proposals within the plan include better targeting of people smugglers, whose unsafe and over-crowded boats have been blamed for recent tragedies, and expanding resources for search and rescue.