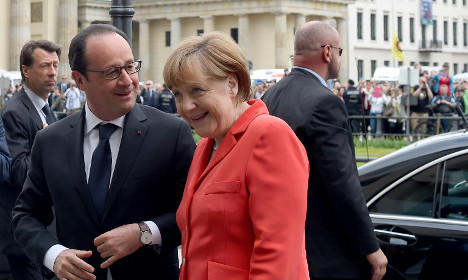 Francois Hollande and German Chancellor Angela Merkel walk by the Brandenburg Gate in Berlin. Photo: AFP
In a joint statement after informal international talks in Berlin, the European Union's two biggest economies also urged other countries to do their part in helping achieve a global push to cut emissions.
France and Germany have “firmly decided to take all efforts to reach an ambitious, comprehensive and binding UN climate agreement by the end of this year”, Merkel and Hollande said.
The informal talks took place under the “Petersberg Climate Dialogue” initiative, launched by Merkel in 2010, to prepare for the UN Climate Change Conference in Paris in December.
Hollande has set out an ambitious goal for the Paris meeting — an agreement to limit the rise in global temperatures linked to greenhouse gas emissions to 2C (3.6 Fahrenheit) from the pre-industrial age.
Several dozen ecologist protesters shouted “stop coal, protect the climate” as Merkel and Hollande arrived at the meeting in central Berlin, attended by representatives of 35 countries which began on Monday.
Environmental group Greenpeace set up a six-metre (20-foot) high model of the Eiffel Tower converted into a wind turbine near the Brandenburg Gate to call for the use of only renewable energy sources by 2050.
– 'Fair, binding rules' –
As well as confirming the two-degree goal, Merkel said the new global climate pact must set “fair and binding rules for both industrial and developing countries”, foster green investment globally and support the poorest countries, including in adapting to the impact of climate change.
“We can all more easily face the challenge posed by climate change if we can have confidence that our international partners pursue the same goal,” Merkel said, addressing delegates.
Germany will strive to double its contribution towards international climate financing by 2020 from its 2014 level, she announced.
Merkel said industrial countries had a “duty” to now help others through innovation by demonstrating the more efficient technologies.
Hollande, for his part, stressed that time was pressing and that just 37 countries had so far outlined their plans towards helping achieve the target eyed at the Paris meeting which kicks off on November 30.
“Let's mobilise, act, it's urgent. It's in our interest because… global warming is not only a threat but also considerable opportunity to invent another model of development,” he said.
Germany, which has pledged to phase out nuclear power and fossil fuels and boost renewables under its energy transition programme, has made climate protection a key issue of its G7 presidency this year.