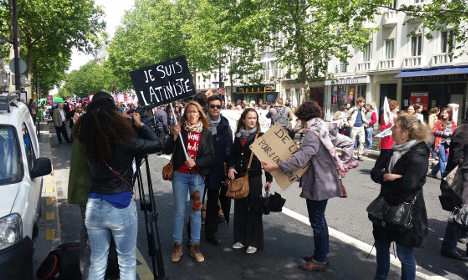 “It will simply make things worse for pupils and worse for teachers,” was how one trade union representative summed up the French government’s planned reforms of secondary schools on Tuesday.

Bruno Marechal from the FSU union, was one of around 10,000 profs from middle schools (collèges) who demonstrated on the streets of the capital on Tuesday.

Marechal, like many around him, insist the government's planned reforms will do little to tackle the huge number of school drop outs in France nor the rising inequality in the system.

“There is still time… to take up discussions again and to stop what looks like being a serious waste for young people, for our profession,” said the SNES teachers union.

According to unions, Tuesday’s call to strike was followed by half of the country’s middle school teachers although education authorities said only one in four took part. One of the most controversial reforms planned by Education Minister Najat Vallaud-Belkacem will see less Latin taught in French schools, because it is deemed only suitable for the most gifted students and resources could be better spent elsewhere.

“If they want to help those students most in need it’s not done by cutting Latin teaching,” Caroline Bucari, a French and Latin teacher in a college near Paris, told The Local.

“I am not just trying to protect my own interests. Learning Latin helps the pupils understand their own language. Yes it’s a dead language but the method of learning is not dead, it applies to all languages,” she said.

One of the motivations for the reform was a 2013 OECD report that judged that France had one of the most unequal school systems in Europe and that chances of success depended a great deal on the socio-economic background of pupils.

Many teachers accepted that the French system could do more to help those from deprived backgrounds succeed but Bucari said the government was going the wrong way about trying to achieve égalité. “It’s not by bringing all students down that will achieve equality,” she said.

French teacher Catherine Belorgey said: “Schools need to be given the means to reduce inequality, which exists throughout society.”

Many protesters waved German flags, a sign of their opposition to the controversial measure to cut the option of “classes bilangue” – which gives pupils the option to learn a second language from 6th grade (ages 11/12)

Again the classes are seen as only benefiting the most academic pupils and the government instead wants the resources and teaching time used so that it becomes compulsory for all pupils to learn a second language from the 5th grade (ages 12/13).

Critics say the move will simply lead to less German being taught in French schools, an accusation fiercely rejected by the government.

“The ‘classes bilangues’ work, they are popular with pupils and they are open to all students,” German teacher Heide Buffet said. “It’s wrong to say they are elitist”.

“France needs people who speak German, you see so many job adverts these days that require German speakers,” she said.

The reform is aimed at giving individual schools more say over the curriculum and what is taught, but critics argue this will lead to too much power being in the hands of headteachers and simply lead to more inequality in the system. France’s education system is notoriously difficult to reform and some have accused the opponents of the bill demanding change but not being willing to accept it when it is suggested.

But teachers marching through Paris on Tuesday said their main issue is that they have not been listened to.

“Of course it’s possible to reform the schools system,” says FSU union rep Marechal. “But the problem here is that there’s been no real consultation. The minister won’t listen.”

Latin teacher Bucari added: “If the government proposes a real reform then of course we would accept it.”

However on Tuesday the government and in particular the Prime Minister Manuel Valls was sticking to his guns.

He said it will be passed as soon as possible and be signed into law at the earliest possible moment.

The government is counting on the changes being introduced in September 2016.