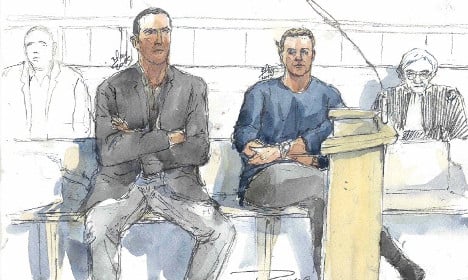 The violent deaths of Bouna Traore, 15, and Zyed Benna, 17, following a chase by police ignited three weeks of arson and running clashes with security forces in downtrodden French city suburbs.

The two officers, Sebastien Gaillemin and Stephanie Klein, stood accused of “non-assistance to individuals in danger” by failing to raise the alarm after the two youths scarpered into an electricity substation.

Gaillemin told the court during the trial that he had checked twice to see whether the youngsters were still in the substation and, satisfied that they were clear, left the scene.

“As he was not aware of the danger, he cannot be blamed for not acting to deal with it,” said prosecutor Delphine Dewailly.

“You don't ease the pain of one drama by adding another injustice,” she told the court at the emotional trial, during which both officers broke down in tears.

If the court follows the prosecution's recommendation and throws out the case, there is no possibility of appeal. (Riot police out in force during the 2005 riots in France. Photo: AFP)

Daniel Merchant, a lawyer for the officers, said: “There will only be closure if they are let off. The case will then be closed… Ten years, that's enough now.”

Merchant added that in the case of a conviction, he would appeal on behalf of his client.

However, relatives of the two dead youths — as well as a third youth who escaped with burns — have launched a civil case, seeking a total of €1.6 million in compensation and damages.

A lawyer for the families said he was certain the officers were guilty of not coming to the boys' aid. “Lets call the crime what it is,” said Jean-Pierre Mignard.

Much of the trial turned on one phrase uttered by Gaillemin during the chase.

According to transcripts from the police radio, he was heard to say: “They are climbing over to get to the EDF (electric company) site. If they enter the EDF site, I don't give them much of a chance.”

During the trial, Gaillemin said he was only aware the boys were running “towards the site” and was not sure they had actually entered it.

As the trial opened, presiding judge Nicolas Leger said the court was “well aware of the particular suffering” of the families, but stressed it was neither “a trial of the national police” nor a ruling on the “riots that shook France”.

Nevertheless, the trial has again brought to the fore the alienation felt by many in France's ghetto-like suburbs, which Prime Minister Manuel Valls said earlier this year still represent a form of “territorial, social and ethnic apartheid”.

Debate over the darker consequences of that alienation shot to the top of the political agenda in the wake of January's jihadist attacks in Paris by youths who had embraced radical Islam.