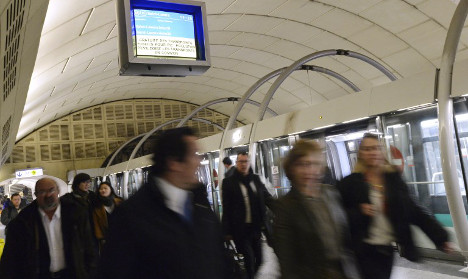 Commuters on the Paris Metro, where the air is more polluted than on the peripherique, new research shows. Photo: AFP
Ever felt that it was almost too hard to breathe on the Paris Metro?
Well that's no surprise, according to research carried out by pollution experts for French channel BFM TV.
They found that the concentration of particulates with a diameter of less than 10 microns — so-called PM10 — was at an average of 75 microgrammes per cubic metre (mcg/m3) inside the Metro. The figure soared above 200 during peak hours.
The safe limit for PM10 is set at 80 microgrammes per cubic metre (mcg/m3), with Paris's alert level fixed at 50 mcg/m3.
Out at the ringroad peripherique, meanwhile, the air was considerably cleaner despite the traffic – recorded to be 20mcg/m3.
The high concentration has been of a particular concern for workers on the train lines, especially the drivers.
Trade union CFDT even handed out pollution masks to drivers earlier this month in a bid to raise awareness about the public transport operator RATP's regulations in classifying high pollution levels. The RATP considers 500mcg/m3 to be the safe level – considerably higher than that of the rest of the city which is at 50.
This year has been tough on the lungs of Parisians in general, with officials in March launching emergency measures such as free public transport and banning half of the cars on the roads as the city suffocated under thick smog.