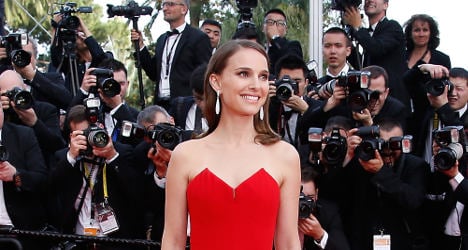 The 33-year-old also acts in the film, “A Tale of Love and Darkness,” about the early years of the founding of the state of Israel. It is based on the memoir of Amos Oz, a writer and advocate of a two-state solution to the Israeli-Palestinian conflict.

Portman has taken on tough roles ever since starting her big-screen career at age 11 in “The Professional,” the tale of a hitman-for-hire (Jean Reno) who becomes her mentor.

But her stubborn on-and-off-screen moral stance saw her turn down the lead in the 1997 remake of “Lolita” because she deemed the classic story, of a young girl seduced by a much older man, “sleazy”.

She also rejected 1996's “Romeo + Juliet” because of the age difference between her and Leonardo DiCaprio.

She likewise initially snubbed “Anywhere But Here” with Susan Sarandon because of a nude scene, but Sarandon demanded the scene be dropped so Portman could sign on.

“I value my private life and security way more than getting parts by flashing my boobs on some magazine or being a sex symbol in films,” she said in a 2000 interview.

Born June 9, 1981 in Jerusalem to a doctor father and an artist mother, Portman proudly brandishes her Israeli background.

Legend has it that a model talent scout discovered her in a pizzeria, and the rest is history.

After “The Professional,” Portman appeared alongside Al Pacino in “Heat” and in Woody Allen's 1996 movie “Everyone Says I Love You”. She has also had leading roles on stage in New York.

Portman reached global audiences with appearances as Queen Amidala in the Star Wars prequels “The Phantom Menace” in 1999, “Attack of the Clones” in 2002 and “Revenge of the Sith” in 2005.

She won a best actress Oscar for 2010's psychological ballet thriller “Black Swan”. It was on the set of that film she met her future husband, French dancer and choreographer Benjamin Millepied.

The following year, she lightened up with the release of “No Strings Attached,” in which she co-stars with Ashton Kutcher in a tale of casual sex between friends.