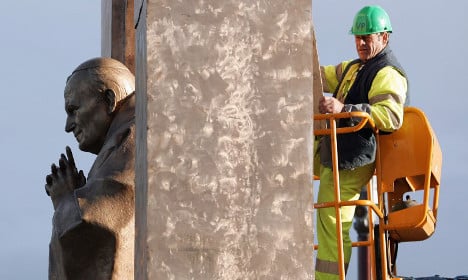 A worker at the 8-metre tall statue in Brittany. Photo: AFP
“If France, the country of freedom, doesn't want it, we'd be happy to put it up here in our town,” Jozsef Michl, mayor of Tata (70 kilometres northwest of Budapest), told AFP by telephone Thursday.
The statue, erected in 2006 in the town of Ploermel in France's nortwestern Brittany region, was judged earlier this month to infringe both the secular nature of France's constitution and a 1905 law on the separation of church and state.
The town was given six months to dismantle the statue.
“It's scandalous that this can happen in the 21st century, as if there was some problem with Europe's Christian roots,” Michl said, adding that he sent a “rescue offer” letter to Ploermel's mayor earlier this week.
The statue would stand in a square named after John Paul II, explained the mayor, a member of Hungary's Christian Democrats party, the junior partner in Prime Minister Viktor Orban's ruling coalition.