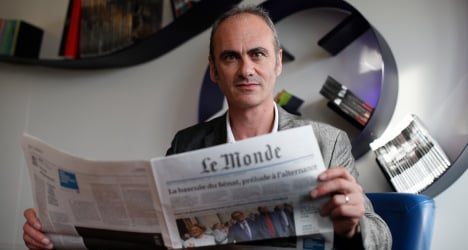 Le Monde has gone through five editorial directors in five years. Photo: Thomas Samson/ AFP
In a letter to the editor, Gilles van Kote said his decision to resign was based on the paper's decision not to retain his candidature for director, and a staff vote that also rejected the editorial second-in-command, Jerome Fenoglio.
But in a turnaround soon after van Kote's announcement, shareholders announced in a press release that they would in fact uphold the candidature of Fenoglio for director.
The three businessmen owners of the paper, industrialist Pierre Berge, telecoms billionaire Xavier Niel and banker Mathieu Pigasse, asked the paper's staff to “consider again the qualities of Jerome Fenoglio, his team and his editorial project”.
Fenoglio had earlier failed, by a small margin, to garner the 60 percent of votes among staff needed to secure the editorial director position.
Le Monde has gone through five editorial directors in the five years since the paper was rescued from the brink of bankruptcy by Berge, Niel, and Pigasse.
Url copied to clipboard!