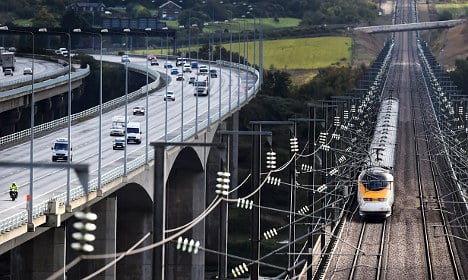 A Eurostar train (R) is seen beside traffic on the motorway, near Rochester, south of London, October 2014. Photo: AFP

Brussels said it will have to change the terms of a deal which would have “hindered the entry of competitors” on the London-Paris and London-Brussels services.

It feared the original takeover deal would have limited competitors' access to rail stations in France and Belgium and to maintenance depots in France, Belgium and Britain.

“The European Commission has approved the planned merger involving the acquisition of sole control of Eurostar International Limited by the French rail operator SNCF MOBILITES,” it said in a statement.

“The Commission's decision is conditional on compliance with commitments designed to facilitate the entry of new rail operators onto the London-Brussels and London-Paris routes, on which Eurostar is currently the only operator.”

The Commission — the EU's powerful executive arm which also regulates competition issues — said the original deal would have the effect of “perpetuating Eurostar's dominant position on these markets.”

When the company was created in 2010, Eurostar International was jointly controlled by SNCF and the British government, with the French operator as the minority partner.

Britain announced on March 4th that it was selling its stake to a private enterprise and SNCF negotiated a package that would allow it to gain exclusive control over Eurostar.