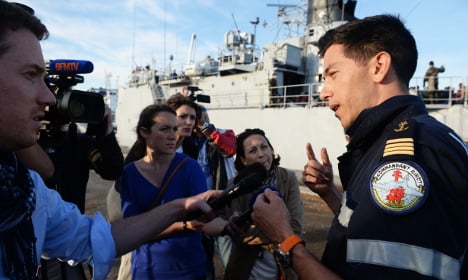 It is a job that requires a strong stomach, and not just to cope with sea conditions that can swing from balmy to billowing in the blink of an eye.

On board the French navy patrol boat the “Commandant Birot” Pierre-Antoine is a lieutenant whose recent responsibilities have included preparing the 90-strong crew for the grisly side of their mission to save migrant lives in the Mediterranean.

“We have to explain to the men that they could find themselves face-to-face with bodies in the sea, and that when a body bloats, it decomposes,” the officer tells AFPTV.

“If they do have to handle a corpse, we advise them to put a pillow case over the head.”

The sailors are also briefed about the precautions they need to take to avoid infection during the transfer of often ailing boat people from their rickety vessels to the safety of the specially adapted “Birot”.

Everyone coming aboard is screened for the high temperatures that could point to a case of the deadly Ebola virus, even though the chances of anyone carrying it are slim given the length of time that most of the migrants have been travelling for.

Often survivors are in a pitiful state of health after days at sea or hours in the water.

“People dehydrate much more quickly because they have been vomiting from sea sickness and sweating in the heat,” explained Morgan, the on-board doctor.

“That can quickly become a catastrophe.”

The Birot has been patrolling off North Africa since April 27 as part of an enhanced international effort to stem a deadly series of migrant boat disasters, which have claimed some 5,000 lives since the start of 2014.

Roused from their bunks by the traditional sound of a bugle, the sailors are quickly ready for action.

But on this particular day, the wake-up call is quickly followed by an announcement that, with the wind gusting at up to 30 knots, the boat is unlikely to be given a rescue mission.

“To avoid the wind, we will stay close to the Tunisian coast,” explains Romaric, a watch officer.

“With a bit of luck, we could pick up survivors from the wrecks of boats that set off from Tunisia. But it is unlikely, because there are not many people leaving from there, unlike Libya.”

It was a different story on the morning of May 2nd, when the Birot was dispatched to support Italian boats rescuing several dinghies crowded with migrants after their distress calls had been picked up by Italy's coastguard command centre in Rome.

“The first one we arrived at had 75 people on board,” said chief engineer Benoit. “They were struggling to stop the water filling the boat, bailing it out by any means possible.”

Stranded some 90 kilometres from the Libyan coast, the boat was only carrying enough food for one more day, had run out of drinking water and didn't have enough fuel to make it to dry land.

Even in fine weather, it took five hours to get the migrants from Africa, the Middle East and South Asia off their floundering boats.

They were dropped 20 hours later in Crotone, in the southern Italian region of Calabria, on the same day as almost 3,500 migrants were rescued in the area. Since the start of the year, an estimated 34,000 asylum-seekers or migrants have landed at Italian ports, stretching the country's reception facilities to breaking point.

One woman on board

Once emptied, the migrant boats are usually shot up by the Birot's trained gunners to ensure they sink and cannot be reclaimed by traffickers for future human cargoes.

Although the work is challenging and exhausting, the crew of the Birot are revelling in a new sense of purpose gained from a humanitarian mission which has seen a female nurse added to the normally all-male staff.

“The team has handled it very well because they are saving lives,” said the ship's captain, Thomas Vuong, the only officer authorised to identify himself by his full name. “There's a sense of purpose and human solidarity.”