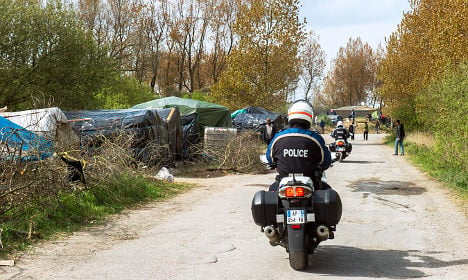 Police on their motorbikes are seen at a migrant camp on May 4th. Photo: AFP
A video has emerged that was reportedly filmed on the outskirts of the northern city on May 5th, a day after Interior Minister Bernard Cazeneuve visited the camps.
It shows scenes filmed from a distance of the CRS riot police interacting with migrants who appear to have been caught hiding in the back of UK-bound trucks. The officers shove the migrants, push them over the motorway guardrail, and even threaten them with a baton.
In one scene, police spray what appears to be tear gas on migrants on the roadside.
The French police directorate said it launched an investigation on Monday into the violence.

“The exact circumstances of this intervention will be rapidly examined… and any failure to apply the ethical rules will be punished,” the police said in a statement on Tuesday.
Prosecutor Jean-Pierre Valensi of Boulogne-sur-Mer near Calais told AFP he had  summoned the police's internal inspection body over the footage, which shows acts that are “liable to be classed as criminal… if they are proven”.
The short film is paused between scenes with quotes from Cazeneuve, who encouraged migrants to stay in France and to enjoy the opportunities here instead.
“We must make them understand clearly that asylum in France offers the best chance for them,” the minister said after his visit.

The video was uploaded by a group called Calais Migrant Solidarity, which has a website in both English and French. There, the group explained that the video showcased what was actually “everyday police brutality”
Nan Suel of French NGO Terre d'Errance told AFP: “I agree that the policemen are in an impossible situation… but nothing justifies these violent acts.”
“The first word the migrants learn in French is 'degage',” which means “go away”, she added.
French authorities have been under pressure to tackle a crisis that has seen hundreds of migrants set up temporary camps around the port city, from where they hope to make it across the Channel to the UK.
Police at Pas-de-Calais said more than 300 migrants — double the average 150 a day — arrived on Tuesday on roads leading to the Channel tunnel.
With its rail and sea links to Britain, Calais has long been a hub for migrants, but numbers have soared since spring 2014, as more and more people flee conflict and repression in Sudan, Syria, Eritrea, and Ethiopia.

But the conditions for the migrants, most of whom are fleeing war and repression in Sudan, Ethiopia and Eritrea appears to be worsening with police forcing them to relocate to a new camp on the edge of town, described by one humanitarian organisation as “the worst in Europe”.

The video, which made headline news in the French media, echoes a January report from Human Rights Watch which accused the police in Calais of “harassment and abuse” towards migrants.

“Asylum seekers and migrants living in the poverty in the port city of Calais are victims of harassment and abuse by French police,” the group wrote.

The report was based on the accounts of 44 migrants who claimed to have witnessed the abuse. France’s Interior Ministry suggested the report was biased.

Meanwhile in Paris, around 500 migrants have set up makeshift shelters at two locations in the heart of the city. When The Local visited recently, many said they weren't keen on staying in Paris and had their sights set on the UK and Norway.

READ ALSO: Migrant camps emerge in the heart of Paris