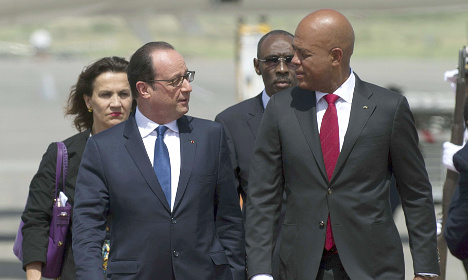 Francois Hollande is received by the President of Haiti, Michel Martelly at his arrival in Port-au-Prince. Photo: AFP

Hollande is only the second French head leader to visit what was once France's richest colony in the Caribbean. Then president Nicolas Sarkozy's visited Haiti after the quake, but Hollande is the first official head of state visit since Haiti won independence in 1804.

Hollande arrived in Port-au-Prince with ministers and secretaries of state and a big delegation from the private sector, and was greeted on the runway by Haiti's President Michel Martelly.

He left Havana after a visit that included talks with President Raul Castro and his brother Fidel, the leader of Cuban revolution.

Hollande and Martelly were to address the nation in Port-au-Prince near the statue of Toussaint Louverture, one of the fathers of Haiti's revolt against slavery and later independence, who died in a French jail.

To boost trade, the presidents will sign several agreements including one that will let the destitute Caribbean country export organically grown bananas to Europe.

France hopes to develop its relations with Haiti via its departments dealing with overseas territories.

George Pau-Langevin, the minister in charge of this portfolio, and the presidents of French islands Martinique and  Guadeloupe, will be with Hollande during his visit to Haiti.

In a sign of France's commitment to long-term international cooperation, a major stop on the president's agenda is the site of the reconstruction of the Haitian State University Hospital, wrecked in the quake.

In that disaster more than half of Haiti's biggest hospital was destroyed by the huge quake, which killed an estimated 230,000 people.

France and the United States committed to rebuilding the facility after the quake. Both pledged $25 million for the project, which is scheduled for completion in 2017.

Hollande arrives as Haiti is entering an electoral period after a three-year political crisis between Martelly and the opposition saw elections delayed.

No new lawmakers have been elected since January and Martelly is effectively ruling by decree.

The Haitian leader's many vocal critics hope Hollande will deliver a forceful speech calling for democratic principles to be respected.