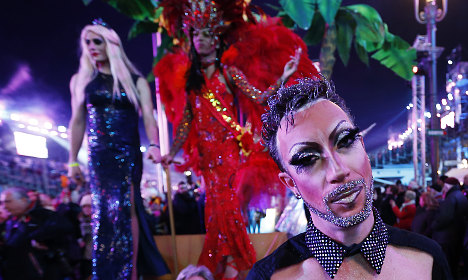 People parade during the "Lou Queernaval", a first gay carnival in France as part the Nice Carnival in February 2015 in Nice. Photo: AFP

After looking at how well 48 different nations ranked on issues such as marriage equality, employment, adoption and medical treatment, the ILGA (European Region of the International Lesbian, Gay, Bisexual, Trans and Intersex Association) gave France a score of 65 percent on its annual Rainbow Map.

This put France in 11th place globally, three places lower than last year, in an index topped by the United Kingdom, Belgium and Malta.

ILGA-Europe spokesman Juris Lavrikovs told The Local that France had slipped in the rankings after the group expanded what it took into account when compiling the index, including treatment of intersex people.
“In terms of our requirements, we see that France still does not have sex orientation referred to in the constitution. France does not prohibit against discrimination in other areas of life other than employment.”
“Intersex people in France are not protected at all.”

Can you guess where your country is on our 2015 Rainbow Map? Check, compare, share! #rainboweurope pic.twitter.com/7JZgCRfNMi

The biggest blot on France's copybook, according to ILGA's Lavrikovs, was that “people are still required to be medically and psychologically diagnosed to proceed in gender reassignment.”
“The most degrading thing which we are appalled by is that sterilization is still required to proceed with gender reassignment. In France, there is still much much more to do.”
Strong performers this year included Sweden, which jumped from seventh to fourth, Croatia, which rose six places to fifth, Luxembourg, which climbed ten spots to 18th, and Georgia, which soared to 22nd from a lowly 31st placing in 2014.
In its France review, ILGA said:

“The Ministry of Education also failed to take resolute action against discrimination in schools.”

At the bottom of the list, Azerbaijan sank below Russia, which in turn trailed Armenia.

“We witnessed several countries making historic strides, while others have stalled in terms of their equality development,” commented Paulo Côrte-Real, co-chairman of ILGA-Europe’s executive board.

“The vital ingredient, present in so many of the countries who have climbed in our Rainbow Map rankings, was unshakable leadership from political figures and activist leaders, often in challenging contexts.”

Lots of legal and policy change = lots of movement on our #rainboweurope 2015 ranking, just have a look: pic.twitter.com/9mcXXTyhtc

Joyce Hamilton, co-chairwoman of ILGA-Europe’s executive board said: “Homophobic and transphobic violence, hate speech and discrimination continue to be an everyday occurrence for some of our LGBTI neighbours. Let’s hope that 2015 will bring more examples similar to Malta and Estonia. Now more than ever, Europe needs political leaders to work with and for LGBTI people in Europe”.