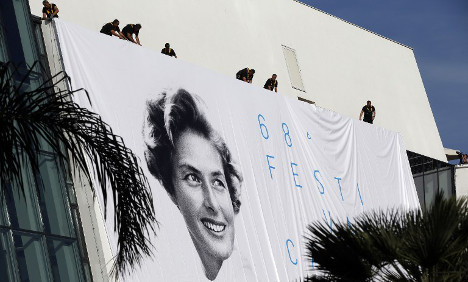 The official Cannes Film Festival banner is unveiled. Photo: AFP
0 – The number of selfies allowed on the red carpet this year. Yes, they have been banned. Why? Because the director general of the festival, Thierry Frémaux, said that the “horrible” selfies make the entrance look “cluttered and disorganized”. 1 – The number of female directors who've won the prestigious Palme D'Or prize – and that was back in 1993 for Kiwi Jane Campion and her film The Piano.
Indeed, the organizers are well aware of the male dominance when it comes to award-winning directors, and this year chose a film from a female director to open the show – Emmanuelle Bercot's La Tete Haute. It will mark only the second time it's happened. Cannes will also award the honorary Palme D'Or to a woman for the first time ever. (Sienna Miller will be on the jury. Photo: AFP)
60 – The length, in metres, of the red carpet. A fresh red carpet is rolled out for each screening, meaning 180 metres will be used each day.
83 – The number of features to be screened this year in the festival, including 53 in the official selection (of which 19 are competing for the Palme d'Or).
468 – The number of 24-hour security cameras filming around the city. The shorefront, known as La Croisette, will be closely watched due to the regular increase in crime in the city over the period of the festival. 500 – The number of extra police officers being sent to patrol the festival due to the typical increase in crimes (some of which are major burglaries, including this €17.5 million heist last week). Most of the officers will be in civilian clothes.
4,500 – The approximate number of journalists who will be on hand to cover the event. (A closer look at the jury. Photo: AFP)
31,500 – The number of people accredited to the event (not including the journalists)
210,000 – The population of Cannes during the festival. Usually, it's only around 70,000, meaning the population triples during for the festival.
20 million – The budget for the festival, in euros (around $23 million). It's half funded by French taxpayers, and half by corporate sponsors.