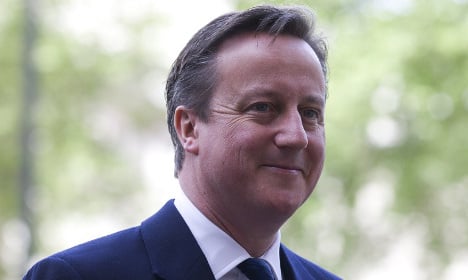 David Cameron has promised to re-negotiate the UK's membership in the EU. Photo: AFP
The poll found that 58 percent of those surveyed in France thought that the UK being in the EU was "an asset", while 37 percent considered it more of a handicap, a BVA survey for iTele revealed.
Meanwhile, 72 percent of the French have a generally positive view of their neighbours across the Channel.
Only 29 percent of respondents said they wanted their own political leaders to be inspired by the UK's economic and social policies.
An overwhelming majority, 63 percent, said they had little or no interest in the recent elections, which saw David Cameron extend his run as the country's prime minister.
He has promised to hold a referendum on whether the UK should remain in the EU.
Philippe Marliere, professor of French and European politics at University College London, told The Local during the lead-up to the election that the French preferred the US and German elections when it comes to foreign politics.

READ ALSO: Why the French care little for the UK election
He added that the French didn't see much difference in the political parties, and that Cameron and Miliband were "not really exciting political figures".
“The Brits tend to be extreme in their views of France, they either love it or hate it. But the French are often just not that bothered about the British,” says Marliere.
Just under 1,000 people were polled in the survey, which was carried out over May 6th and 7th.