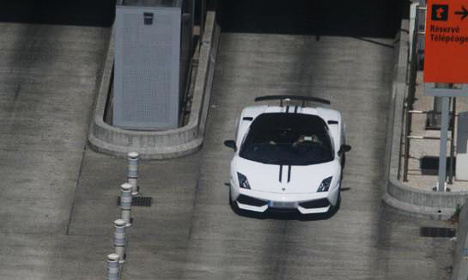 The sun-seeking gendarme was driving to Hendaye with his family on Friday afternoon when three sports cars, a Lamborghini and two Porsches, overtook him at high speed on a motorway in south-western France, newspaper Sud-Ouest reports.

Taken aback by the Britons’ extreme alacrity, the officer got straight on the phone to his colleagues and the police quickly had eyes in the sky.

An Ecu 64 police helicopter took off from Bayonne and soon corralled the Zaragoza-bound Brits at the Biarritz La Négresse motorway toll gates.

The over-eager trio were soon joined at the gates by two other sports cars belonging to the same convoy.

The stunned gendarme reckoned the motorists were racing each other on the motorway and said they were travelling "at a very brisk pace", without revealing the exact speed.

Police fined the drivers before letting them complete their journey to Spain.

Two days later, a French Porsche driver was caught on a speed camera doing 249 kilometres per hour on a country road with a limit of 90 kph, police said.

The driver, a repeat speeding offender aged around 40, lost his licence over his breakneck spin on Saturday about 40 kilometres south of the central city of Tours. He was ordered to appear in court on June 23rd.