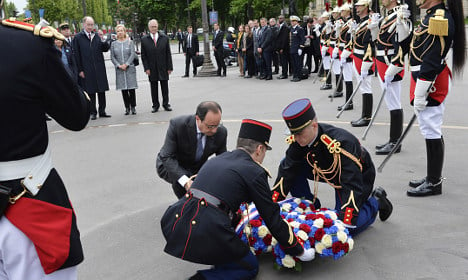 Francois Hollande places a wreath near the statue of former President Charles de Gaulle in Paris on May 8th. Photo: AFP

"We didn't experience the war, we see it as a far-off reality, sometimes abstract, even though it is not so far from us, in Ukraine, further still in the Middle East," he said.

Hollande also referred to the hundreds of French citizens who have gone to fight alongside jihadists in Syria and Iraq.

"There is also terrorism which can strike us, racism, anti-Semitism. There are still causes which should spur us on."

France is still recovering from a jihadist killing spree in and around Paris in January which left 17 people dead over three days.

"I think in the wake of what happened in January we must come together, find common ground," said Jean Ruiz, witnessing the ceremony on the Champs Elysees avenue.

"There are memories which must not be forgotten," said his wife Mireille.

Europe held sombre ceremonies to mark 70 years since victory over Nazi Germany on Friday as leaders warned of modern day threats such as the war in Ukraine and Islamic extremism.

Celebrations of the WWII victory in Europe were muted a day before Moscow throws a massive military parade which is being snubbed by Western leaders due to tensions over the crisis in Ukraine.

Poland opened Victory Day celebrations with a midnight ceremony in northern Westerplatte, where the first shots of the war were fired on September 1st 1939 as Nazi forces swept across the border.

United States Secretary of State John Kerry, whose mother was born in France, also laid a wreath under the Arc de Triomphe.

In Washington DC, 56 restored American "warbirds" that helped the Allies achieve victory in the war, will roar over the city later on Friday as up to 10,000 people look on.

Seventy years ago, "a handful of war-scarred countries started down a new path that united a continent," Kerry said in a statement.

Today, thanks to the European Union, we are closer than ever to a Europe that is whole, free, and at peace."

Kerry expressed his country's support to Europe in the face of the new threats it is facing, commending its "leadership in the fight" against Isis.

"Together we stand firm with the people of Ukraine in the face of Russian aggression," he said.

Victory day is celebrated across Europe on May 8th, the day Germany surrendered, ending WWII in Europe.

Russia and former Soviet states mark the anniversary on May 9 due to a time difference during which the surrender became effective.

The war in the Pacific would end on September 2nd when Japan surrendered to the United States after the atomic bombing of Hiroshima and Nagasaki.

Historians believe between 40 and 60 million people were killed in WWII, half of them civilians.

Ukraine, locked in a brutal conflict with pro-Moscow rebels, will for the first time break with Russia and mark May 8th as a "Day of Memory and Reconciliation".

Kiev has chosen a new symbol for the event — a poppy — and changed the way it refers to the conflict from the "Great Patriotic War" introduced by Soviet authorities to the "Second World War."

Germany marked its "liberation" from the Nazis in a joint session of parliament where speaker Norbert Lammert hailed the willingness of the country's neighbours to forgive.

"Today we remember the millions of victims of an unprecedented annihilation campaign against other nations and peoples, against Slavs, against the Jews of Europe," he said.

German newspaper Die Welt hailed the changes in the country: "In a few decades a free society has been established. Children and grandchildren endeavour to understand this dark past."

Germany's Foreign Minister Frank-Walter Steinmeier on Thursday laid a wreath at the site of the Battle of Stalingrad in Russia as part of commemorations to mark the defeat of Nazi forces in WWII.

Britain will hold two minutes of silence at 1400 GMT, marking the moment when wartime prime minister Winston Churchill broadcast his historic speech announcing the end of the conflict.

A chain of over 100 beacons was to be lit across the country later on Friday and the next day cathedrals nationwide have been invited to ring their bells in celebration.