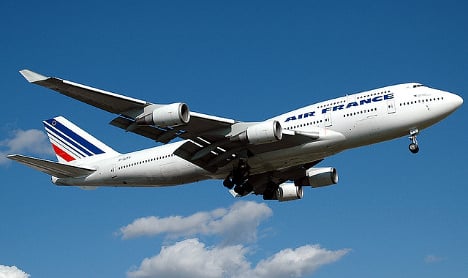 The idea of giving birth on a plane would be most mothers' worst nightmare. Photo: Doug/Flickr
Not many people can say they were born in the air, but that will be the reality for one young boy who came into the world aboard Air France flight AF 719 on Tuesday morning.
French media reports have not yet mentioned exactly how pregnant the mother was, but evidently she was too far along to hold on and the baby was born in the skies between Dakar and Paris.
And another remarkable thing about the incident is that apparently most of the passengers didn't even realize.
"About an hour after take off, the pilot sent a message over the intercom in a very calm voice, asking if there was a doctor on board," passenger Jean-Louis told French newspaper L'Express.
After the announcement a doctor headed to the rear of the plane and helped deliver the baby without complication.
READ ALSO:  The things that annoy the French on a plane

Shortly before landing, the pilot announced that a baby had been born, news that was met with a round of applause from passengers.
Emergency medical crews met the family upon landing in France, and announced soon after that all was well with the happy family.
L'Express noted that it was nothing more than an urban legend that those born on a plane will get a lifetime of free travel, but Air France has promised to send some kind of gift along anyway.
The chances of a doctor being on board a flight are actually higher than one might expect at 80 percent, reported newspaper Le Figaro.
And babies being born in the air are also a more common occurrence than you might think, with a 33-year-old woman giving birth over the Atlantic in January this year.
The boy, meanwhile, is yet to be named. Feel free to suggest an appropriate name for an air baby in the comments below.