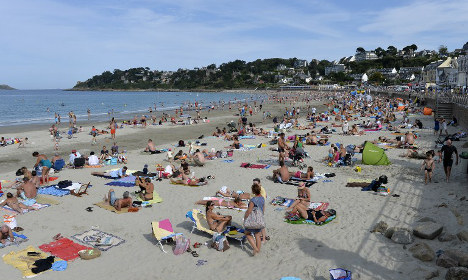 Tourists enjoy the nice and warm weather at the Testraou beach in Perros -Guirec, western France. Photo: AFP
The French had reason to crow on Wednesday, with their best travel and tourism competitiveness rating in years from the World Economic Forum (WEF), but there are issues that "need to be addressed" notably around safety and security.
The forum published the biennial rankings on Wednesday, ranking 141 countries across 14 separate dimensions, revealing how well countries conduct their travel and tourism sectors.
France finished second overall to Spain, with Germany in third place, the United States in fourth and the United Kingdom in fifth.
It was recognized as the most attractive destination overall for tourists in sheer numbers, with over 84 million arrivals last year alone.
"With its combination of rich history and attractions, ski resorts and coastlines, France ranks high in cultural (second) and natural (eighth) resources," the WEF added.
"These are complemented by its emphasis on environmental sustainability (23rd), strongly enforced environmental regulation (29th) and a sustainable approach to developing the T&T industry (48th)."
France also recorded a top ten finish in infrastructure for air transport, ground transport and tourism services facilities.
Six reasons why France is the world's top tourist destination But it wasn't all good news.
The report noted that France had been let down by its safety and security, which it said were "emerging as a sensitive issue that needs to be addressed".
While the WEF didn't go into details, there have been concerns about the impact of the Paris terror attacks on the tourism trade as well as the ongoinghigh terror threat level.
Soldiers and police are still on display in force at "sensitive sites" across the country as part of an anti-terror operation put in place after 17 people were killed in Paris by jihadists in January.
The presence of soldiers has even left some tourists fearful. Soon after the attacks, a tourist from Brittany told The Local that the capital had changed.
"It feels a bit like being in a war zone," she said. "I suppose it’s necessary but it’s also a reminder of everything that’s happened." And last month, an armed man was caught by police as he was understood to have been on his way to attack a Paris church.
The petty crime rate has also been a hot topic, especially in tourist-rich Paris, and particularly among Chinese tourists, who are a regular target of thieves thanks to their custom of favouring cash over cards. Last month, 50,000 Chinese people signed a petition in a bid to raise awareness of crime in the capital.
Despite the letdowns in security, France still enjoyed a big leap in the rankings from seventh place in 2013, and up from third place in 2011.