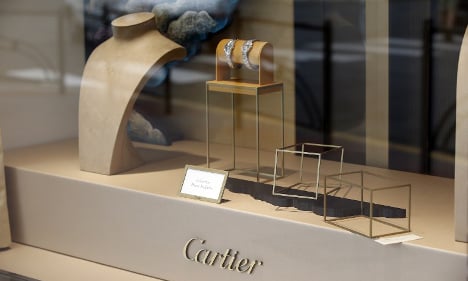 The robbery came a week before the start of the Cannes Film Festival, during which the world's top jewellery makers bring some of their best pieces to the town, to adorn the movie stars walking the red carpet and attending parties at the cinema extravaganza.

One of the robbers wore an old-man mask and carried a pistol as he barged into the store on the famed beach-front Croisette on Tuesday morning.

He let in two accomplices with scarves around their faces, while a fourth man stood guard outside.

Two employees and a shopper were in the store at the time.

The robbers put the jewellery and watches into a leather satchel and jewellery bag. In their rush to escape, a number of expensive watches fell on the pavement and were recovered by the store.

It was not known whether the stolen items were brought in especially for the film festival.

They made off in a Mercedes that was later found burned out in a residential part of town. The car had been stolen in March.

Police are using surveillance cameras from the store in a bid to identify the thieves.

The large Cartier store sits next to the luxury Carlton hotel, which was also hit by a jewellery theft in July 2013 while it was hosting an exhibition and sale by Israeli brand Leviev.

On that occasion, the thief helped himself to over 140 million euros' worth of items — including diamond-encrusted jewellery — after breaking into the hotel through a door on the ground floor.

The man left calmly from the hotel and has never been caught.

Some 70 luxury stores line the Croisette.