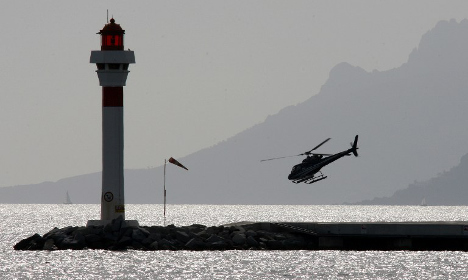 A helicopter in Cannes, southern France. Photo: AFP
For those heading to the Cannes Film Festival next week and wanting to avoid the drive from the Nice-Côte d’Azur airport – here's a bit of good news.
US company Uber is joining forces with French helicopter firm Helipass to offer an Uber taxi service in the air – an Uberchopper – getting festival-goers from the airport to the venue in just seven minutes, and all for the price of €160. An Uber ride in a cab would cost between €60 and €80, the company added.
The journey via the highway can take up to an hour when the traffic is slow – and organizers say travelling by air is the best way to avoid getting stuck among the 125,000 visitors expected to attend the festival this year.
Helipass heads guarantee that after using the app to place the order – just as one does when hiring an Uber cab – a chopper will be available within 15 minutes to transport guests – many of whom could indeed be A-list celebrities keen on avoiding the perils of joining mere mortals on the highways.
The fleet of seven choppers can seat between three to six passengers each, and will be on call on a permanent basis during the festival.
It will be the first time Uberchopper hits France, after offering helicopter rides in several countries across the world.
The 68th edition of the Cannes Film Festival will run from May 13th-24th. Read more about the line-up here and the jury here.