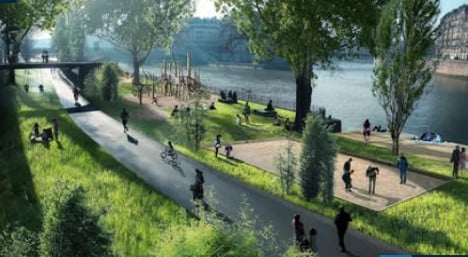 The right bank of the River Seine could look like this in the future. Image: Luxigon

The mayor of Paris’s war on automobiles looks set to continue apace.

On Tuesday Anne Hidalgo launched her plan to turn the right bank of the River Seine into the city’s latest pedestrian zone.

It follows a similar move by her predecessor Bertrand Delanoë, whose flagship scheme to close the highway along the left bank has been deemed a success even if it angered motorist groups. Speaking at a press conference on Tuesday Anne Hidalgo said: “It’s an urban project, almost philosophical, which is to envisage a city in an alternative way than through the use of cars.”

Hidalgo pointed to the work done in cities like Lyon and Bordeaux, which have been lauded for reclaiming parts of the river banks for pedestrians.

“The transformation of an urban highway into a promenade will be very strong marker of this mandate,” she added.

Hidalgo, who vowed to reduce traffic in the city, said the Georges-Pompidou highway on the right bank of the Seine – part of a Unesco World Heritage Site, will be permanently handed over to pedestrians after the annual Paris Plage festival in 2016. As a result the 2,700 vehicles that pass along the highway each hour at peak times, will be moved elsewhere and their place will be taken by riverside gardens, games areas and people out for a stroll.

A period of public consultation will now begin over exactly how much of the river bank highway will be closed off to traffic.

Two options are on the table: Reclaiming the portion of highway that runs between the Pont de Sully and Châtelet or the more ambitious project of transforming the much longer stretch between Tuileries Tunnel and Port de L’Arsenal.

Motorist group 40 Million Motorists are opposed to the scheme and have set up an online petition.