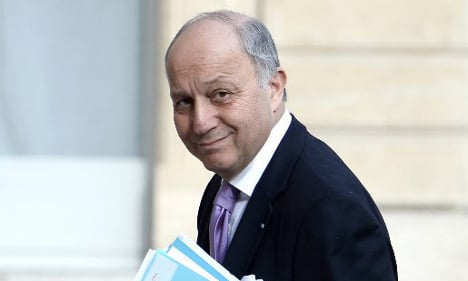 French Foreign Minister Laurent Fabius. Photo: AFP
However Fabius will not attend a massive Red Square military parade seen as a show of force by President Vladimir Putin whose annexation of Crimea last year and support for militants in eastern Ukraine has strained ties with the West.
"I won't be at the parade itself but I will go lay a wreath and then I will go to the Kremlin," Fabius told Europe 1 radio.
"President Francois Hollande can't go, he will be in Cuba, but we wanted to be represented on a ministerial level," Fabius said.
He joins leaders such as Czech Republic President Milos Zeman and Slovakia's Prime Minister Robert Fico who will also visit Moscow but will not attend the parade.
German Chancellor Angela Merkel will head to Moscow on May 10th to lay a wreath with Putin at an unknown soldier's memorial before holding a joint press conference.
"It is history. The Russians lost dozens of millions of people in the war and history doesn't change," said Fabius.
"We are playing a very important role in trying to find a solution in Ukraine. We hold discussions with the Russians, we are not going to talk one day and then not be there the next."
Of the 68 world leaders invited only 22 will be present.
The will include Greek Prime Minister Alexis Tsipras, United Nations head Ban Ki-moon and the leaders of Cuba, India, Mongolia, Serbia, South Africa and Vietnam.