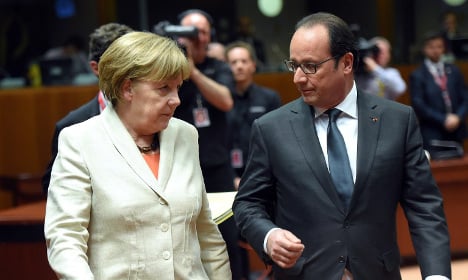 German Chancellor Angela Merkel and France's President Francois Hollande. Photo: AFP
Long portrayed as a victim of snooping by allies, Germany faced embarrassing press reports last week that it had spied on its ally as well as
the EU's headquarters and European businesses, including France's Airbus, on behalf of US intelligence.
"The Franco-German friendship will overcome … this news, which has still to be confirmed," government spokesman Stephane Le Foll said.
"There will be a parliamentary investigation, it will be transparent. We trust the German government," said Le Foll, giving the first official response to the reports from France.
Citing intelligence agency documents, the Bild daily reported that the office of German Chancellor Angela Merkel was informed in 2008 of German
involvement in US economic espionage but did not react.
Merkel insisted on Monday that Germany's BND intelligence service was "under control" and repeated a pledge to testify before a parliamentary
inquiry if called to do so.
Airbus has said it would "file a criminal complaint against persons unknown on suspicion of industrial espionage".