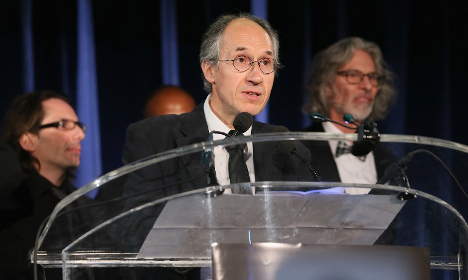 Charlie Hebdo editor-in-chief Gerard Biard accepts the award in New York. Photo: AFP
Charlie Hebdo's Editor in Chief Gerard Biard and film critic Jean-Baptiste Thoret were in New York to receive the award to a standing ovation from the crowd.
Biard told the crowd that he was "very proud" to accept the award, and urged others to espouse the magazine's values in support of freedom of conscience.
"Each citizen of the world must adopt these values and stand up for them, against political and religious obscurantism. The more numerous we are, the weaker they are," he said.
The PEN authors association had faced tough opposition after announcing that Charlie Hebdo would be given an award for courage in using freedom of expression.
More than 150 writers pulled out of the event in protest at cartoons they say were offensive to France's minority populations, including celebrated writers such as Peter Carey, Michael Ondaatje and Francine Prose.
Carey, a two-time Booker Prize winner, said the award went beyond the group's traditional role of protecting freedom of expression against
government oppression.
"A hideous crime was committed, but was it a freedom-of-speech issue for PEN America to be self-righteous about?" the New York Times quoted him as saying.
Charlie's editor-in-chief Gerard Biard dismissed this argument.
"It's always gratifying to have a contrarian opinion, to say 'I don't think like the masses. I'm above all that,'" he told AFP.
"That's their problem. If they think PEN is no longer about protecting free expression, why don't they leave it?"
PEN's executive director Suzanne Nossel insisted that the award was not given for literary merit, but rather the "courage" of writers who "continue to occupy a space which is precariously dangerous because they’re subject to misinterpretation".
The organization wrote in a statement Charlie Hebdo deserved the award:
"In paying the ultimate price for the exercise of their freedom, and then soldiering on amid devastating loss, Charlie Hebdo deserves to be recognized for its dauntlessness in the face of one of the most noxious assaults on expression in recent memory."