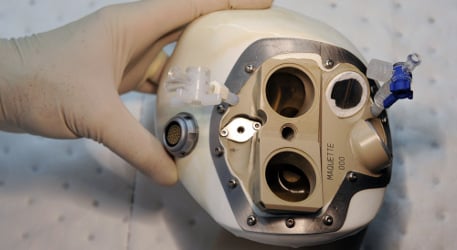 The 69-year-old man, who wished to remain anonymous, was terminally ill when he received the experimental heart that was seen as a long-term solution for patients with end-stage heart failure.

Carmat, which designed what it calls the world's most-advanced artificial heart, said the patient was admitted to hospital on Friday with "circulatory collapse".

A medical team noted the heart was not functioning correctly and transplanted a new device, however the patient died on Saturday from post-operative complications.

Artificial hearts have been in use for many years as a temporary fix for patients with chronic heart problems.

However Carmat hopes to provide a longer-term solution to tens of thousands who suffer from heart disease — the world's leading cause of death — and are unable to receive a transplant.

The device, a self-contained unit implanted in a patient's chest, is a mix of synthetic materials and animal tissue, and seeks to mimic the form and function of an actual human heart.

The artificial heart uses soft biomaterials intended to lessen the risk of blood clots and rejection by the immune system. It is powered by a belt of lithium batteries.

Carmat's first trial of the device on a 76-year-old man ended March 2 with the patient's death after two and a half months.

The second patient said in an interview with French media a month ago that he had "recovered" to the point of going on bike rides.

Nearly 100,000 people in Europe and the United States are in need of a heart transplant, according to Carmat, but only about 4,000 hearts become available for transplant.

The French firm's trial was to involve four people. A third patient was confirmed to have received their artificial heart last week.

The first phase of the trial will be considered a success if patients survive for a month after the transplant. Carmat will then carry out a second phase of clinical trials which will involve 20 patients.