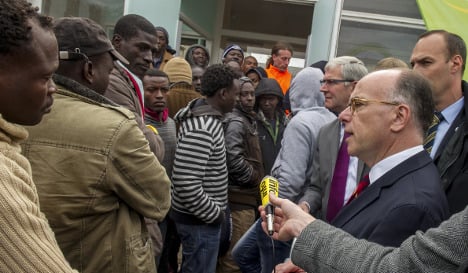 Cazeneuve visited Calais on Monday to check out the conditions that the migrants were living in and to visit a new welcome centre that has opened.

French authorities have been under pressure to tackle a crisis that has seen hundreds migrants set up temporary camps around the port city, from where they hope to make it across the Channel to the UK.

But the conditions for the migrants, most of whom are fleeing war and repression in Sudan, Ethiopia and Eritrea appears to be worsening with police forcing them to relocate to a new camp on the edge of town, described by one humanitarian organisation as “the worst in Europe”.

Despite the poor conditions and the serious lack of lodging for those seeking asylum, Interior Minister Cazeneuve told migrants France was the best hope for many of them. "We must make them understand clearly that asylum in France offers the best change for them,” said Cazeneuve, adding that those who don’t lodge an application will be taken back to the borders of France.

The minister said word is getting through to the migrants in Calais with 455 applications for asylum having been lodged since the start of the year.

But that’s still a small amount compared to the number of migrants who have amassed in Calais in recent months.

Migrants spoke of their fears of being sent back to Italy or Romania – the countries where most of them entered the EU – if they apply for asylum in France and their applications are turned down.

“I want to go to Great Britain, there are no jobs here,” said Mohamed, who is living in the new camp outside Calais known as the “Jungle Two”, which humanitarian associations say is nothing more than a “slum”.

Cazeneuve rejected that term and also insisted that the behaviour of police towards migrants “must be exemplary”.

Meanwhile in Paris, around 500 migrants have set up makeshift shelters at two locations in the heart of the city. When The Local visited last week, many said they weren't keen on staying in Paris and had their sites set on the UK and Norway.

READ ALSO: Migrant camps emerge in the heart of Paris