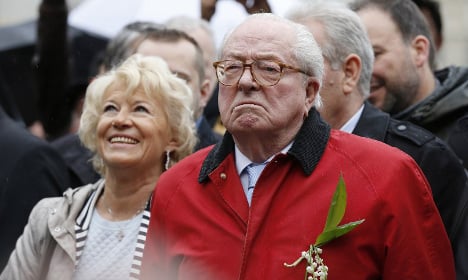 Jean-Marie Le Pen at the party's May Day rally. Photo: AFP
The 86-year-old, who led the party for four decades, was suspended on Monday over comments in which he dismissed Nazi gas chambers as a triviality, leading to a bitter feud with his daughter Marine.
The younger Le Pen has been actively trying to distance the party from its racist and anti-Semitic image as she plans her bid for the next French presidential election in 2017.
But her firebrand father's refusal to tone back controversial remarks, such as the need to defend the "white world", has led to a public dispute between the two.
Furious at his suspension, and the threat of losing his title of honorary party president, the octogenarian turned harshly on his daughter, accusing her of "betrayal" and saying he no longer wanted to see her win 2017 elections.
He said his suspension was a "criminal act," vowed to "disown" his daughter and ordered her to "give up her name."
"If such moral principles should govern the French state, that would be scandalous," he said in a radio interview.
Asked if he wanted his daughter to win the 2017 election, Le Pen said: "For the moment, no."
He said his daughter was "a bit worse" than the mainstream parties in parliament "because an adversary fights you head on, here she is stabbing you in the back."
The relationship between Marine and her father has been particularly rocky in recent months.
Six months ago, she stormed out of her father's house after his Doberman dog savaged her Bengal cat to death.
Then last month, after he repeated his view that the gas chambers were merely a "detail of the history of the Second World War", Marine decided enough was enough and openly split with her father, saying he was committing "political suicide".
Recently he also claimed that France has to get along with Russia to save the "white world".
The dispute was bared for all to see during the party's traditional May 1 rally in Paris when Le Pen — conspicuously dropped from a line-up of National Front leaders on stage — strode uninvited onto the podium, grabbing the limelight as his daughter readied to make her speech.
"I think that was a malicious act, I think it was an act of contempt towards me," Marine said on Sunday.
"I get the feeling that he can't stand that the National Front continues to exist when he no longer heads it."
Under Marine Le Pen, the FN has enjoyed a series of election successes, notably coming first in last year's European elections.