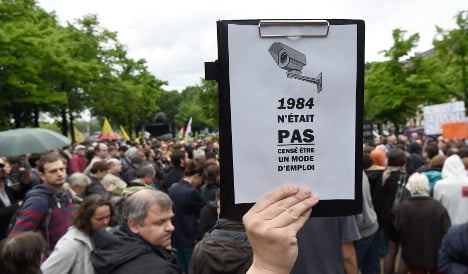 With France still on high terror alert MPs are set to give the green light to a new law that would give spies new powers of surveillance.

Despite accepting the need to battle terrorism, civil liberties groups in France and abroad have raised some major concerns about the details of the new laws, which Amnesty International says will bring the country a "step closer to a surveillance state".

1. Courts hand over power to the prime minister

The main bone of contention for most opponents is that the new law will allow authorities to spy on the digital and mobile communications of anyone linked to a “terrorist” inquiry without prior authorisation from a judge.

Basically the bill will allow the implementation of intrusive measures such as placing cameras and recording devices in private dwellings and install "keylogger" devices that record every key stroke on a targeted computer in real time. But without any independent checks and due diligence that an independent judge would normally provide.

In the words of the Council of Europe’s Human Rights Commissioner Nils Muiznieks: “The benefits of this right to privacy, that protect individuals from intrusion by the state, should not be limited, unless a judicial authority verifies its legality, the necessity and proportionality of the surveillance measure prior to it being imposed.”

A new "independent" 'national commission for checking intelligence techniques' (CNCTR), made up of magistrates, MPs and experts, will be set up to monitor surveillance. But its only real power will be to advise the prime minister who will decide whether to impose surveillance. But the PM can choose to ignore that advice.

In short, the only person who will provide any kind of checks and balance is the prime minister. 2. Data kept for a lengthy period

Another concern for civil liberties groups surrounds the length of time that intelligence authorities can store the data they have gathered from texts, emails, telephone conversations and hidden microphones and cameras.

The bill lays out the time limits for how long each kind of data can be stored:

For any kind of encrypted data then none of these deadlines apply. If the new surveillance powers were only to be used on terrorist suspects themselves then civil liberties groups would have less reason to oppose the bill.

However one of their major concerns is that the law will allow authorities to snoop on pretty much anyone who comes into contact with the suspects.

They fear that people who are in the wrong place at the wrong time and come into contact with a suspect for whatever reason will then be legally subject to surveillance themselves. Perhaps the most controversial of the bill's proposals are so-called "black boxes" — or complex algorithms — that internet providers will be forced to install to flag up a pattern of suspicious behaviour online such as what keywords someone types, what sites they consult and who they contact and when.

The black boxes can be put in place not only by internet service providers but also by the likes of internet and tech giants Apple, Google, Facebook and Twitter.

The system monitors users and looks for “weak signals”. In the case of anything suspicious then internet providers will be forced to report the suspicious person to authorities.

SEE ALSO: Why the French should be worried about new spying law 5. Not just against terrorists

While the bill is being presented by the government as a necessary measure to tackle the “unprecedented threat from terrorism” that France faces, in reality it is designed to do much more.

The bill foresees boosting the use of surveillance for seven different purposes:

Once MPs have approved the law it will then pass to the senate.