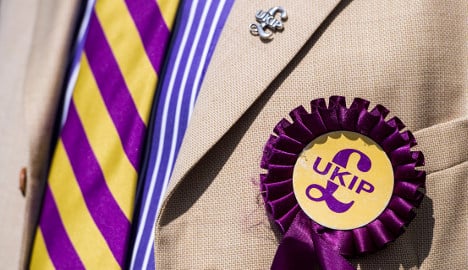 The choice of ties worn by some politicians in the UK would be an unforgivable offence in France. Photo: AFP
With my brand new British passport, I will be able to vote in the general election.
Obviously France and Great Britain are both Western democracies, but I must admit that there are a few notable differences between the two when it comes to elections.
As a first-timer in the UK, here are the main ones that I have noticed so far:
1.    It is much easier to vote in the UK. In fact, it is incredibly easy when compared to France. I chose to do the postal vote and voila! All I needed to do was to tick a few boxes and send back the envelope.
We French are a lot more complicated. First of all, we don’t do postal vote. You can vote by proxy or 'procuration'  (i.e. somebody else will vote for you), but it is a labour of love and you have to fill all sorts of questionnaires.
As for actually going to a poll station, you need to be prepared to queue at least a couple of hours at the French consulate. And I won’t even mention all the papers you need to have in France (one per candidate). You have one single paper in the UK. Pure bliss. 2.    It has been scientifically proven that the more mistresses a French candidate has, the more his popularity will increase.
In the UK, people are shocked at the mere mention of sex. That said, the 2015 campaign has had its fair share of amusement: a Parliamentary hopeful (Lib Dem Maajid Nawaz) who claimed he was a ‘feminist’ was caught on CCTV camera in a strip club, repeatedly trying to touch a naked lap dancer. It created quite a stir over here. Let’s face it, in France nobody would have batted an eyelid. In fact, come to think of it, it would have boosted his campaign.
3.    Can someone tell me where all the billboards are? In Paris you could see the faces of the candidates everywhere. Over here, I can’t see a thing. It is business as usual on the street. General election? What general election?
4.    In France and in the UK, you can’t watch a decent movie in the run-up to election day. The TV programmes are all about the election campaign. What can I say? Some things never change.
5.    The ties of British politicians are a lot more colourful than the ties of their French counterparts. To be completely honest with you, they sometimes look a bit like Christmas trees.
They are clearly not afraid of colour clashes. Nobody seems to care. In France, such tie choices would be on the front page of national newspapers. A fashion faux-pas can’t be forgiven in my home country. It doesn’t matter this side of the Channel.
6.    In the UK, ordinary citizens like you and me vote once, and your vote will be used to elect the members of parliament from different parties and the leader of the biggest will then become Prime Minister.
In France, there are two elections: one for the president, and one for the MPs (‘deputes’). And to make matters even more complicated, there are two rounds for each election. In short, where we vote only once over here, we vote four times in France. I told you, we French are complicated.
On election day in France the press have also been asking their own questions about the UK vote, most of which centre around Europe.
BFM TV asked why the British voted on a Thursday whereas most countries in Europe, including France voted on Sundays. And the Nouvel Obs was one of many articles asking whether the British people really wanted to leave Europe, given that a victory for David Cameron would trigger a referendum on the EU election.