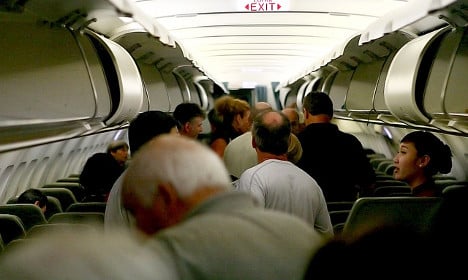 What annoys the French most about flying? No it's not strikes. Photo: Kevin Jaako/Flickr
When it comes to what annoys French air passengers the most about taking planes then you would have thought that "strikes" would have been top of the list.
However the results are in – and it seems that the French seem to find other passengers the most annoying thing about airline travel.
It's not the turbulence ruining a good meal or having to take a shuttle bus across the tarmac (though these two did feature in the survey) – it's mostly about other passengers.
So if you find yourself sitting next to a French person on a plane it might be worth knowing what to avoid doing if you want to preserve an entente cordiale with your fellow passengers.
The annoyances on this list, taken from travel booking website Kayak, would no doubt feature on lists from many other nationalities, albeit perhaps in a different order. (Passengers awaiting their luggage. Photo: udim/Flickr)
1: Early queuers – 15 percent
The French just can't tolerate those who go and queue up too early at the gate. Relax people, you've almost certainly got an allocated seat anyway, queueing early isn't going to get you to your destination any quicker.
2: Early standers – 23 percent
This was the habit French flyers find the most irritating: people who rip off their seat belt and stand up as soon as the plane touches the ground – only to disembark at almost the exact time they would have if they stayed seated.
3: Luggage vultures – 15 percent
Fifteen percent of those surveyed said they couldn't stand it when fellow passengers hovered too close to the luggage conveyor belt. Not only are these vultures getting in the way for everyone else, but they can block your view of your own suitcase as it sails past for the second time.
4: Meal turbulence – 22 percent
The second most popular gripe had nothing to do with the other passengers, rather with the elements outside. Yes, almost one in four passengers said that turbulence ruining their meal time was the most irritating thing about air travel. (A meal on an Air France plane. Photo: Luke Lai/Flickr)
5: Tarmac shuttle- 11 percent
Over one in ten French respondents said they disliked having to take a shuttle from the gate to the airplane, preferring no doubt to walk straight from the terminal, into a tunnel, then onto a plane. This was the only other complaint that wasn't about other passengers.
6: Applauders – 14 percent
It's a habit you don't find all over the world, but French people are sometimes known to applaud when a plane lands safely. And 14 percent of the fellow passengers can't stand it. So keep your hands in your pockets next time your delayed flight eventually lands in France.
While the survey did allow passengers to specify other points of irritation, no respondents appear to have mentioned delayed planes as a major bugbear, nor fellow passengers who take extreme liberties with their seat recliners, nor people who insist on talking to you.
This comes in a stark contrast to a survey of 1,000 American fliers last year by Expedia, where 67 percent complained of rear-seat kickers, 64 percent moaned about inattentive parents, and 56 percent were irked by smelly co-passengers.
Kayak, meanwhile, surveyed over 4,000 people from a host of countries around the world, 500 of whom were French.
The company found a few discrepancies with other nationalities when compared with the French, for example, a whopping 34 percent of Russians said a shuttle ride was the most annoying aspect of air travel (compared to 11 percent in France), while 24 percent of Italians couldn't stand the applause (14 percent in France).