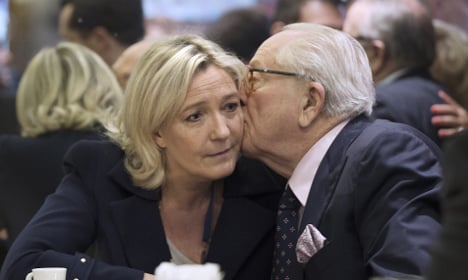 Jean-Marie Le Pen has been suspended from the party his daughter now leads. Photo: AFP

Jean-Marie Le Pen has been suspended from France's National Front, a party that he founded and that his daughter Marine now leads.

The move comes after Le Pen had faced a disciplinary hearing on Monday over his recent inflammatory comments about the gas chambers which he said were just a "detail of history".

He was also in trouble for his interview with an extreme right magazine in which he defended France's Nazi collaborator Maréchal Pétain and saying Russia could help restore the "white world".

A special meeting of party members will be called "in three months" to decide whether to strip him of the title of honorary president, a statement said.

Following the decision Le Pen senior told reporters: "I've been disowned" and described the suspension as "a criminal act".

A furious Le Pen also attacked his daughter Marine, saying he was "ashamed" that she carried his name.

"The party members will be indignant," he said.

After those comments Le Pen, who founded the party in 1972 and led it until 2011 was accused by his daughter of “taking the party hostage".

Those comments, in which he reasserted his previous claim  that the gas chambers were "just a detail of history" saw the 86-year-old MEP, hauled before the executive board in Nanterre on Monday.

Le Pen senior refused to appear before the disciplinary meeting, and was only in Nanterre for an earlier meeting to discuss upcoming regional elections.

Arriving in Nanterre, he said he was "calm and determined as usual. I'm not changing at my age."

On the eve of the meeting Marine Le Pen said her father "no longer has the right to speak in the name of the party".

Marine Le Pen has been trying to distance the party from its racist and anti-Semitic image as she plans her bid for the next French presidential election in 2017.

And in a sign of how deep the feud between father and daughter is, Jean-Marie Le Pen was conspicuously dropped from a line-up of National Front leaders on stage during the party's traditional May 1 rally in Paris.

But determined to upstage his daughter, he nevertheless strode uninvited onto the podium to take the ovation of the crowd.

"I think that was a malicious act, I think it was an act of contempt towards me," Marine said on Sunday. "I get the feeling that he can't stand that the National Front continues to exist when he no longer heads it up."

Florian Philippot, both a vice president and an MEP, said Le Pen senior should resign and refused to rule out officially excluding the party founder.

“He has very clearly distanced himself from the current party line. What’s the point of him staying in a party with which he doesn’t share the same ideas?” he told RMC radio on Thursday.

And Steeve Briois, the FN mayor of Henin-Beaumont pointed out the party risks being accused of double standards after expelling members in the past who brought outrage against the party.

"We can't punish a militant who compared [Justice Minister] Christiane Taubira to a monkey and let Jean-Marie Le Pen do and say anything just because he founded the National Front.”