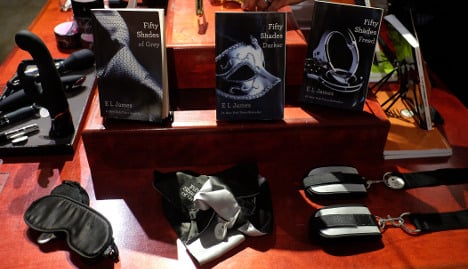 A French pensioner masquerading as a model uses Fifty Shades of Grey to lull women into sex. Photo: AFP
The bizarre story surfaced after a woman, named Sylvie,  reported that she had been tricked by the older Frenchman – who went by the name of "Anthony Laroche" on an online dating site.
The woman, one of many to have taken an interest in the handsome model's profile, was lured to "Anthony's" apartment in Nice, he suggested they should "make things more exciting" by having Fifty-Shades of Grey-style sex in a darkened room.
After the victim put on a blindfold, she joined "Anthony" in his bed, thinking he was a "good-looking man with brown hair and blue eyes".
But she told police in Nice that when she turned on the light after having sex with the man, he looked nothing like like the handsome model in his profile picture.
"He was a balding man of about 65, who was quite wrinkly and wore glasses – I was absolutely disgusted," the woman said, reported Le Parisien newspaper.
Police found that the woman's testimony matched three similar complaints from recent years, and after raiding the man's home found that he had tried similar tricks with 342 women across the country.
A second victim is quoted as saying: "He didn't want me to take off the blindfold. When I insisted, he got angry. I ended up seeing his silhouette in the dark. He was old, pot-bellied with a big nose." It later emerged that he had used the picture of a professional model on the dating sites, before engaging in a raunchy text exchange with his "victims", and luring them to meet for a "blind" date.
After being arrested the man told police that he couldn't see what he had done wrong, considering that he already had the woman's consent to the sex, adding that had she asked if he really was the person in the picture then he would have confessed to the truth.
"Some women have a crazy side to them and like men who surprise them," he reportedly said.
His lawyer, Laurent Poumarède, said the pensioner had never forced any of his victims into sex and the photo he used of the model were "too good to be true".
"I wonder if these women didn't knowingly close their eyes to the truth in more ways than one," the lawyer told Le Parisien.
The pensioner admitted to finding the image of the model on the search engine Google.
Authorities will now probe whether other women have fallen victim to the man's deceit, and he is suspected of "rape by surprise" (known as viols par surprise in French).
The man has already served a prison sentence for tax fraud. (The image of the 68-year-old, left, and the model's picture he used. Photo: Le Parisien)