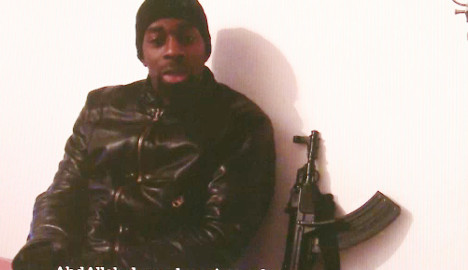 Police outside the Jewish supermarket in eastern Paris that was hit by a terror attack in January. Photo: AFP
Investigators suspect that the man, Claude Hermant, was responsible for supplying the arms used in the terror attacks, French newspaper La Voix Du Nord revealed on Sunday.
Hermant, 51, is a former soldier who had fought in the Congo, Angola, and Croatia. He was arrested in January on suspicion of trafficking weapons.
The Frenchman lives and works in Lille, a city in northern France close to the Belgian city of Charleroi, where Coulibaly purchased his weapons. The arms are understood to have been imported from eastern Europe.
Despite his shady past – which includes affiliation with Belgian skinhead gangs and the extreme right French party the Identitarian movement (la mouvance identitaire) – it's unclear whether Hermant was aware that the weapons would used be in one of the bloodiest terror attacks in modern French history.
"Hermant did not necessarily know the final destination of the weapons," a source close to the case told the paper. "There are always some kinds of intermediaries when it comes to trafficking like this."
His lawyer rubbished the idea that Hermant would have knowingly provided weapons for terror attacks.
"He is a soldier, who would never fight against the interests of his own country," he told La Voix Du Nord.
Coulibaly was armed with a Škorpion vz. 61 submachine gun, a vz. 58 assault rifle, and two Russian-made Tokarev pistols during the January attacks, where he killed five people, including one police officer. He took 15 people hostage in a Jewish supermarket before he was killed by police.