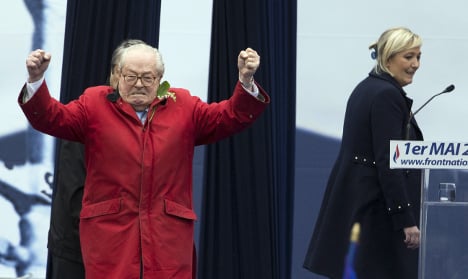 Jean-Marie Le Pen infuriated his daughter last month by reiterating his long-held view that the Nazi gas chambers were merely a "detail of history", as well as making other controversial remarks defending the "white world".

Marine condemned the comments as "political suicide" and a highly-publicised spat between them saw the 86-year-old party founder forced to pull out of upcoming regional elections.

"Jean-Marie Le Pen should no longer be able to talk in the name of the National Front, his comments are against the fixed (party) line," she told French radio.

Marine Le Pen has been trying to distance the party from its racist and anti-Semitic image as she plans her bid for the next French presidential election in 2017.

And in a sign of how deep the feud between father and daughter is, Jean-Marie Le Pen was conspicuously dropped from a line-up of National Front leaders on stage during the party's traditional May 1 rally in Paris.

But determined to upstage his daughter, he nevertheless strode uninvited onto the podium to take the ovation of the crowd.

"I think that was a malicious act, I think it was an act of contempt towards me," Marine said Sunday. "I get the feeling that he can't stand that the National Front continues to exist when he no longer heads it up."

Jean-Marie Le Pen has been summoned Monday to appear before the party's top executive authority, which will examine whether to take action against him following last month's comments.