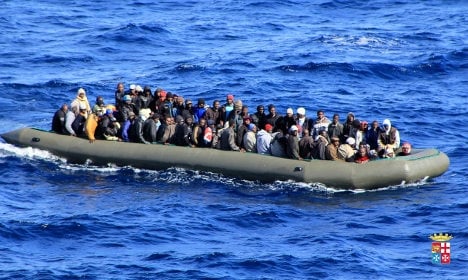 A makeshift boat filled with migrants spotted last month by an Italian Navy ship, in the Mediterranean sea near Lampedusa. Photo: Italian Navy

The migrants — all men — had been on board three boats, the authorities said, adding that two suspected people smugglers were also caught and will be handed over to Italian police.

The French patrol boat "Commandant Birot" was sent on Tuesday to reinforce the EU's Triton surveillance operation after a series of migrant tragedies in which nearly 5,000 have drowned since the start of the year.

Italian coastguards said they were involved in coordinating the rescue of at least six migrant boats on Saturday morning, with some of the operations still ongoing.

They said they were still unable to say how many migrants were involved in the rescues, some of which also involved the Italian navy, although they described it as a "very busy day".

More than 220 migrants from sub-Saharan Africa were picked up from the sea off Libya on Friday and were taken ashore on the Italian island of Lampedusa on Saturday morning.