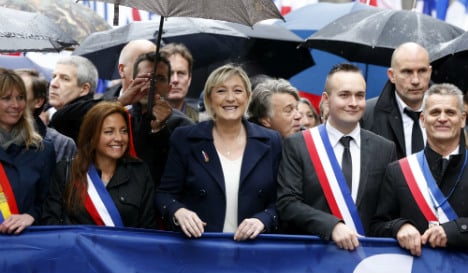 Two others members of the militant feminist group had earlier tried to stop Le Pen laying at wreath at a statue of Joan of Arc in the French capital but were unceremoniously bundled away by the party's security guards.

But the second intervention by three activists carrying a "Heil Le Pen" banner on a balcony overlooking the podium on which she was speaking, seemed to destabilise the usually combative leader, who last month made week Time magazine's list of the world's 100 most influential people.

Le Pen took several minutes to recover her composure enough to hit back with, "Strange how people who call themselves feminists should interrupt a speech in honour of Joan of Arc."

Earlier her father Jean-Marie Le Pen had done his best to ruin her day by striding uninvited onto the podium at Opera to upstage her and take the ovation of the crowd.

The party's founder had been conspicuously dropped from the line up of leaders on stage after a fierce public feud with his daughter after he repeated claims that Nazi gas chambers were merely a "detail of history" — comments that have seen him convicted in the past for denying the Holocaust.

Marine Le Pen has been actively trying to distance the party from its racist and anti-Semitic past as she plans her bid for the next French presidential election in 2017.

But in a sign that old habits die hard, a camera crew from the French TV station Canal+ were attacked by the party's supporters at the end of the speeches before being rescued by the party officials and security guards.

French Prime Minister Manuel Valls condemned this "awful spectacle of the extreme right that never changes" in a tweet, while Paris's Socialist mayor Anne Hidalgo marked the 20th anniversary of the murder of Moroccan-born Brahim Bouarram, who died after being pushed into the river Seine by National Front activists after their May Day rally in 1995.